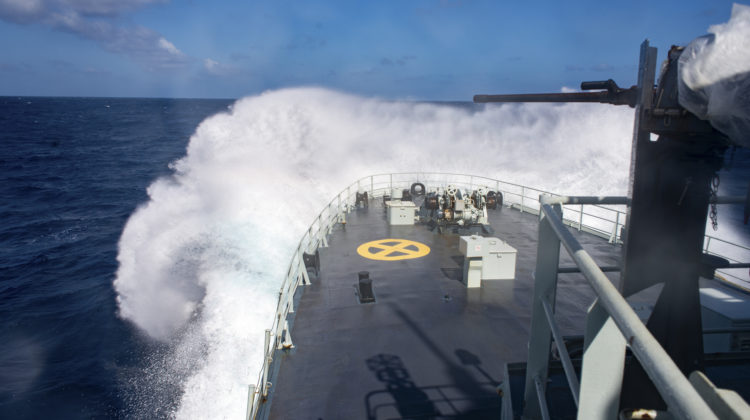 Waves crash against HMCS Nanaimo in the waters of the eastern Pacific Ocean during Operation CARIBBE on March 3, 2020. Photo: Canadian Armed Forces Photo.

Mission accomplished for members of 19 Wing Comox members, who were part of a major drug seizure operation.

The Totem Times reported that last month, a 41-person Air Task Force contributed to the seizure of roughly 3 tonnes of cocaine worth more than $293 million USD.

This happened while they were deployed on Op CARIBBE, a U.S.-led enhanced counter-narcotics operations in the Caribbean Sea and the eastern Pacific Ocean.

“We had 12 members from 407 Long Range Patrol Squadron, who were deployed on Operation CARIBBE, and two members who were liaison officers at the air component coordination element, Atlantic, that were present in the 41-person detachment,” Little explained.

Under this operation, Canadian Armed Forces (CAF) ships and aircraft deployed to the region to support the U.S. mission to suppress trafficking in international waters and airspace.

Little says the 407 squadron personnel are crew members on the CP-140 Aurora aircraft, which is “specifically designed to look for maritime surface and subsurface targets, and that’s how they were employed.”

The Times reported that this deployment consisted of:

According to the Times, the 41-person detachment also consisted of:

Little said it as a team effort, specifically, “a 41-person team effort, all working in close coordination in order to effect the seizure of interdict drugs.”