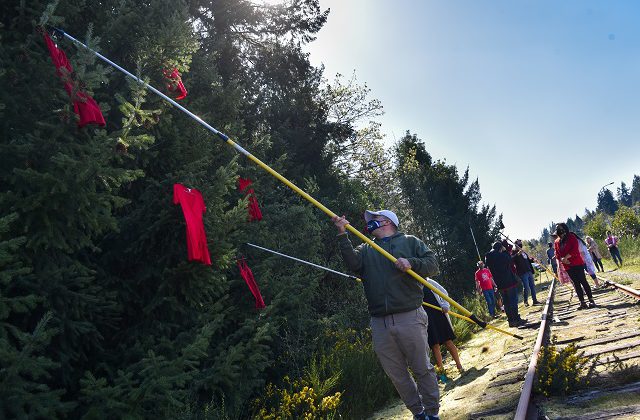 The Town of Ladysmith and Stz’uminus First Nation are coming together to show solidarity against racism and hate.

This comes after videos surfaced online showing a pair removing red dresses hung along the Island Highway, near Ladysmith.

On Saturday, Ladysmith and Stz’uminus took a stand to ensure the thousands of missing and murdered Indigenous women across Canada are not forgotten.

More than a dozen red dresses were hung up along the highway and since then, the town hung up dresses on the trees in front of city hall, and at another at a park further down the highway.

The REDress Project started over a decade ago as a public art installation by Métis artist Jaime Black in response to the more than a 1,000 missing and murdered Indigenous women across our country.

Communities now hang red dresses in public spaces to raise awareness and draw attention to the gendered and racialized nature of violent crimes against Aboriginal women.

Red dresses were also installed by the Town in front of City Hall as well as Bob Stuart Park.

The Town is also encouraging community members to learn about the REDress Project and if moved to do so, consider hanging a red dress in their windows or trees in your yard to show their support.

After two people were seen taking the dresses down, Campbell Riverite Stephanie Elickus – organizer of the ‘100 Red dress project MMIWG’ Facebook group – told us that “to see them ripped down was disheartening, I was in tears. I couldn’t believe that someone would do something like that.”