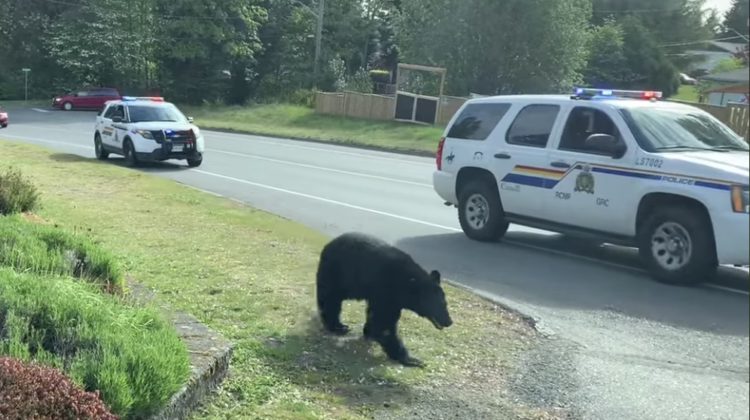 Photograph courtesy of Town of Ladysmith Facebook page.
The residents of Ladysmith and Duncan have received reminders of just close we are to nature.
On Friday morning in Ladysmith, a black bear had to be given an RCMP escort out of town.
In a post on its Facebook Page, Ladysmith said police vehicles followed it along 2nd avenue to the Ladysmith Cemetery where it returned to the forest.
The town said residents can help avoid encounters by keeping garbage cans and compost bins stored securely until it’s time for collection.

In Duncan, the North Cowichan-Duncan RCMP alerted residents to a cougar sighting that took place on Thursday evening.

The RCMP said it happened around 9:30 pm when a cougar was spotted in the 500 block of Cedar Avenue near Government Street.

Despite extensive patrols in the area, the police did not find it.

The RCMP said it did not threaten anyone, but is warning residents to remain vigilant.