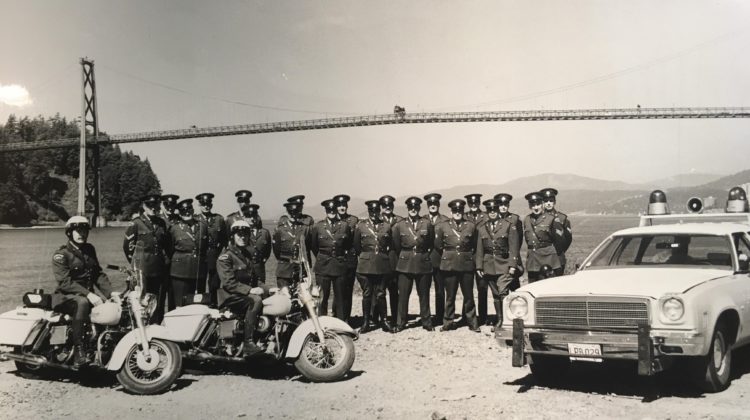 BC Highway Patrol posing in front of the Lions Gate Bridge, during the 1970s (Photo from TranBC website)

BC RCMP Traffic Services is rebranding as BC Highway Patrol, and for Cpl. Mike Halskov, the name change makes perfect sense.

They’re in charge of provincial highways, like Highway 1 – or the Island Highway – a popular route connecting many Vancouver Island communities.

“To clarify the role of our program and concisely define our service delivery on BC’s provincial highways, provincial traffic operations will be now called BC Highway Patrol,” the media relations officer explains. “We believe this new name more clearly distinguishes our role and service delivery from the municipal and detachment traffic services.”

Halskov says their goal is to change driver behaviour so they make better, safer choices. He says BC Highway Patrol wants to make our roads safer for all road users – drivers, passengers, cyclists, and pedestrians.

And with the new name, comes a new motto: “Making Our Highways Safer Together.”

“Our role is as much about education as it is about enforcement,” Halskov adds.

BC Highway Patrol has a number of specialized units, each focused on different aspects of road safety. Halskov says they have about 455 employees focused on traffic law enforcement and public education, working closely with both internal and external partners.

But looking back at its origins, the patrol started out much smaller: ‘A Brief History of the BC Highway Traffic Patrol’ posted to the TranBC website offers a look back at how it all started.

“During the 1950s, British Columbia was undergoing an incredible post-war boom. New highway infrastructure projects (bridges and freeways) were being built at a rapid pace, automobiles were everywhere, and cell phones and the internet were light-years away. Motorists often needed help at the roadside and the Department of Highways Traffic Patrol was there to help.

Formed in 1958, the Department of Highways Traffic Patrol was responsible for traffic control on five major lower mainland bridges – First Narrows (Lions Gate), Second Narrows (Iron-workers Memorial), Oak Street Bridge, George Massey Tunnel, Port Mann Bridge, and all their approaches. The patrol consisted of both corporals and patrolmen (approx. 30-40), who were sworn in as reserve constables with the Vancouver City Police, West Vancouver Police, and the BC RCMP.  None of the patrol ever had or carried guns while on duty.”

More on the history of BC Highway Patrol can be found here.