Grade Three Student Making a Difference in the Schoolyards of Chemainus 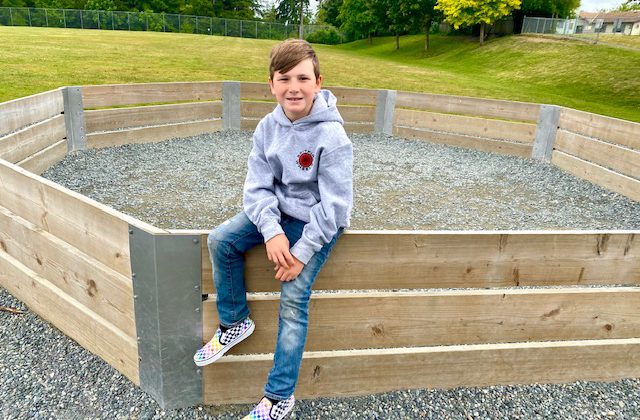 A grade three student in Chemainus is looking to help fellow students have some fun.

Greyson Miller, 9, has been busy this past week making sure that everyone at Chemainus Elementary can play the game he loves. Gaga ball.

Gaga ball is a game that has been growing in popularity since it came to Canada, you’d be hard pressed to find a school and campground that doesn’t have a gaga ball pit in it. Greyson’s school has two.

The pit has six or eight sides, and is home to a ‘kinder, simpler form of dodgeball.’ The game involves jumping in and out of the pit, to play and when eliminated. But not all of Greyson’s friends were able to take part in the game he loves.

“My friend is in a wheelchair and she can’t get in the gaga ball pit.” Greyson says, “So I thought we could make a gate [on the side of the pit], so everybody like her could get in so everybody could use it.”

Greyson sprung into action, he wrote his principal a letter. Afterwards, Greyson was called to the principal’s office, in a good way. He said he was nervous, but pushed through and got permission to send a video to the Parent Advisory Council – with the help of his teacher – for a funding request for his cause.

His teacher, Alyssa Davidson says, “Greyson is a very caring student who is always so accepting and supportive of everyone around him. He has helped his peers anytime he can lend a hand. He stands up for people when he knows it’s the right thing to do.”

Greyson says some of the inspiration for this idea came from his dad, Dan Miller. Dan has volunteered with Vancouver Island Adaptive Snow Sports in Mount Washington for the last five years.

“We spend all winter getting anybody that wants to get out on the slopes. We get them out there any way that we can,” Dan says. “We have a variety of equipment and training to help anybody with any sort of disability to get out onto the snow.”

Dan is clear that he had no part in the idea for this, saying Greyson was “driving the bus” on this.

“It was a proud dad moment for sure,” Dan said. “This was all Greyson’s idea. I didn’t even know what gaga ball was before he told me that he had written the principal and he was going in to try and help his friend to be able to play this game with them.”

Greyson will be actively fundraising in a Covid friendly way by trimming weeds, mowing lawns with his older brother Tavin, 14. He’ll also be collecting bottles and cans, as well as selling stickers.

Davidson has also got Greyson set up on GoFundMe. Greyson headed out of town for a few days and came back a couple of days later to find they had surpassed their goal already. He was shocked.

“I thought we were just going to raise enough money for one, but we raised enough money for both of our gaga ball pits, plus one for another school,” Greyson says. “It’s been crazy, I was just gone for two days and I came back and I was like, ‘Oh my God, how much support these guys have done.’”

Even though Greyson’s initial goal has been met, that doesn’t mean they’ll stop working to raise funds. He has since expanded his vision. He says his goal now is to raise enough to get gates on all of the pits in the Cowichan Valley School District.

The community has been rallying behind this young philanthropist, with a number of local businesses sending money to the GoFundMe. McArthur Construction is donating their time to install the gates on the pits. They’ve also had 100 stickers donated to them – along with 100 stickers they’ve bought – to sell at the front of Chemainus Elementary.

Greyson is grateful to those who have donated, “Thank you so much for all the support, it’s been amazing. And thank you Ms. Davidson, because she made the GoFundMe.”

If you’d like to donate to help Greyson out, you can click here check out the GoFundMe.