Preserving Salmon Habitat in the Koksilah and Chemainus Rivers 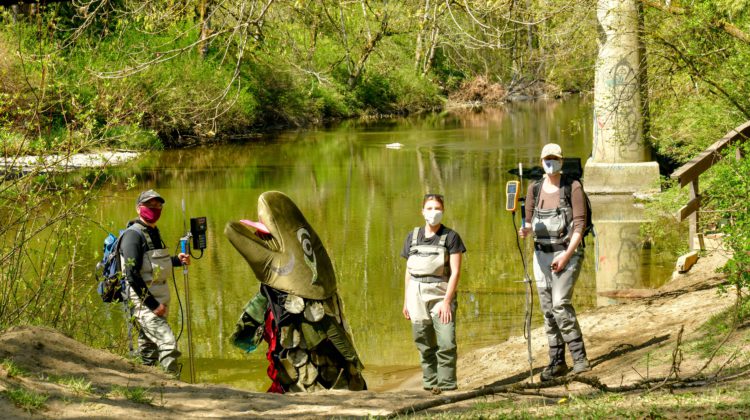 You may see a group of people wading along the Koksilah and Chemainus Rivers this summer carrying high-tech gadgets instead of fishing rods.

They’re involved in a three-year research project now underway to study the changes taking place on the rivers due to climate change.

Tom Rutherford of the Cowichan Watershed Board says two teams are walking the rivers gathering “detailed measurements and data on the habitat features.”

The project is a partnership between Cowichan Tribes, the Halalt First Nation, and the Watershed Board, and funded by the Habitat Conservation Trust Fund.

Rutherford says the teams are made up of Indigenous members working with accomplished biologists Jade Steel and Melissa Evans.

The effects of climate change on the rivers and the vegetation along the banks are being measured.

According to Rutherford, “we’re not waiting to see the effects of climate change we’re seeing them now” in the Cowichan Valley and on the southeast side of Vancouver Island.

The area will experience warmer winters with more rain and less snow, which will result in lower snowpacks that supply streams and rivers with meltwater into the summer months.

There will be increased flooding in the winter, and summers will be hotter and drier.

Rutherford says they want to understand what can be done to ensure the health of both rivers and the Salmon that return to spawn each year.

He says the Salmon runs are one of the things that define us as a community, as a culture, and as a people, are they are threatened.

“Salmon need water and salmon need cold water, in the summertime, and enough of it, and we’re really seeing that as a major challenge.”

Rutherford says the first step is to look at the habitat features of both rivers, such as pools, ripples, and glides, and map them.

They’re examining the relationship between water levels and the available fish habitat and measuring the changes that occur as water levels drop.

He says a geomorphic hydrologist will model that information so the effects of low water levels can be seen.

They want to identify the problems so they can start to adapt to the changes taking place and help the rivers remain resilient to climate change.

Rutherford says another very interesting part of the project is being done by Cowichan Tribes and Halalt First Nation.

“We’re going to have a community member interview knowledge holders and elders with respect to the Indigenous perspective on the effects of water flows.”

Rutherford says that traditional knowledge of water levels on cultural uses and values will be added to hard science data gathered during the project.

The riparian zones along the rivers will also be mapped and they will identify areas for restoration work such as removing invasive species and planting vegetation.

Rutherford says, “this sort of work in these watersheds, which have kind of been forgotten, is really long overdue.”

He says there’s a “really strong partnership between the watershed board and Halalt and Cowichan Tribes,” and plenty of talented people working on the project.

Rutherford says they chose to use local residents and experts rather than hiring a consulting firm from Metro Vancouver or elsewhere.