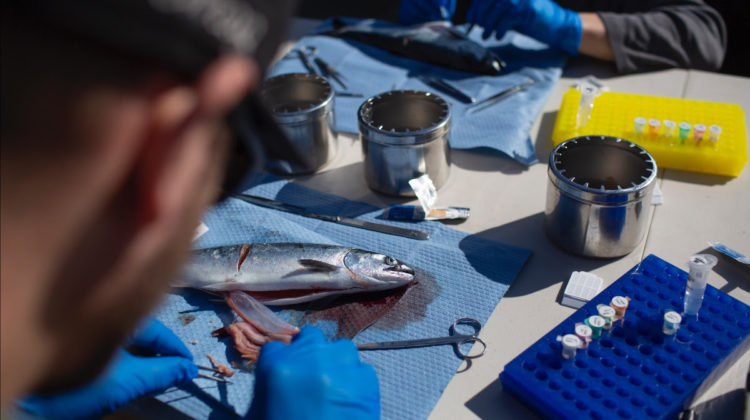 Researchers looking for the source of a virus that infects and weakens BC Chinook salmon say it can be traced back to the North Atlantic and arrived on the West Coast with Atlantic salmon imported for aquaculture.

Dr. Gideon Mordecai, a viral ecologist at the University of BC, says there has been confusion about where the Piscine orthoreovirus first came from.

Dr. Mordecai says they sequenced 86 whole new genomes of the virus and combined the data with all previously available sequences and discovered the virus that is in the Pacific Ocean “was introduced about 30 years ago and the source of the introduction is in the north Atlantic.”

Dr. Mordecai says the genome sequencing “clearly indicates PRV is not native to B.C. waters—it originated in the Atlantic Ocean” and was spread through salmon aquaculture.”

He says they also used epidemiological research that clearly showed salmon farms are the source and the amplifier of the PRV transmission.

“We also carried out an analysis where we actually screened almost 5000 thousand wild Chinook salmon for the virus and when we looked at these we found the salmon which were sampled close to the farms were more likely to be infected with PRV.”

Piscine orthoreovirus is associated with kidney and liver damage in Chinook salmon and is continually being transmitted between open-net salmon farms and wild juvenile Chinook salmon.

The research was conducted by the University of British Columbia, and the Strategic Salmon Health Initiative (SSHI), a partnership between Fisheries and Oceans Canada (DFO), Genome BC, and the Pacific Salmon Foundation.

A co-author of the study, Dr. Andrew Bateman of the Pacific Salmon Foundation, says it shows the need to move BC’s salmon farms out of the ocean and onto land to protect wild salmon on the west coast.