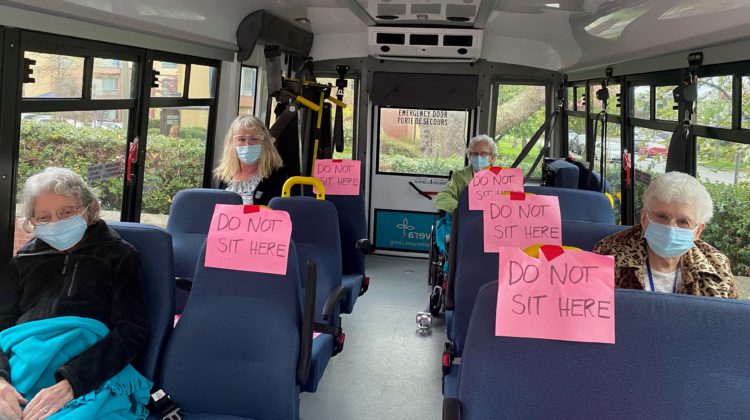 For long-term care residents – who’ve been isolated for so long, due to the COVID-19 pandemic – bus outings have a big impact, and are a meaningful step towards a return to “normal.”

“Seniors living in long-term care, as well as their caregivers, were among the first to receive their COVID-19 vaccinations,” notes Island Health.

“This has provided a renewed sense of hope for many residents who are eagerly participating in pandemic-safe activities, including scenic bus tours – an outing that is helping residents feel connected to nature and establish a sense of connection to their community.”

Coral Coupland is a recreation therapist at Cumberland Lodge. She says they resumed their bus outings as soon as Island Health announced they could be reinstated.

The lodge took residents out to Union Bay last week, and she says it was the first time they’d been off-site in over 15 months.

“They were so excited and joyful,” Coupland recalls. “Some of them didn’t remember where they went an hour after returning, but they were still glowing, knowing they had participated in something special.”

She says any resident can join the outings, as buses are equipped with a wheelchair lift system. At Cumberland Lodge, they often drive out to the country to see bison and lambs grazing in the fields, or they might drive to the ocean to look for sea lions.

“They love doing things they’ve done in the past,” Coupland adds. “It makes them feel connected to their past life and immensely helps their emotional and mental health.”

Meanwhile, at Cairnsmore Place in Duncan, residents were ecstatic as they returned from their first bus outing, which was around the Shawnigan Lake area.

Resident Roy described the trip as “heaven,” and wishes he could take the bus everyday.

Activities coordinator Erinn Dawe says residents were held up for such a long time: “Our residents have been restricted to their homes since the pandemic began,” she explains.

“The first outing was epic and the residents were so jubilant that they were cheering when they returned. It was a heart-wrenching moment.”