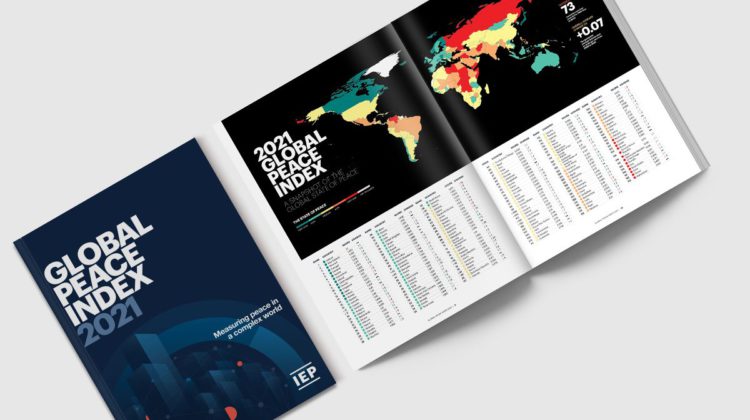 Image Courtesy of Institute for Economics and Peace

Lockdowns and the economic impact of the COVID-19 pandemic played a role in the world becoming a less peaceful place.

The Institute for Economics and Peace has released its global peace index for 2021.

The Institute says the pandemic had a significant impact on levels of conflict and violence, fuelled in large part by responses to coronavirus restrictions.

Over 5,000 pandemic-related violent events were recorded between January 2020 and April 2021.

While Canada remains one of the most peaceful countries, the Institute notes there was a rise in hate crimes against Asians in Vancouver.

An increase in hate crimes was recorded in urban areas, with the number of hate crimes against Asians in Vancouver increasing by 717 per cent.

The country also experienced the recent deadly hate attack on a Muslim family in London, Ontario.

Europe maintained its position as the most peaceful region in the world.

Canada is ranked in the ten most peaceful countries, but the United States ranked 122nd, and the civil unrest south of the border resulted in North America’s overall rating dropping significantly.

The pandemic increased interpersonal violence in both countries.

The COVID-19 pandemic resulted in severe economic contractions in both countries.

Canada’s economy shrank by an estimated 5.4 per cent, and the impact on the US economy contracted an estimated 3.5 per cent.

The Institute says some forms of violence declined globally in the short term, but growing unease with lockdowns and rising economic uncertainty resulted in civil unrest increasing.

The Institute for Economics and Peace is an independent, non-partisan, non-profit think tank.

Canada Post to Deliver a Green and Sustainable Operation