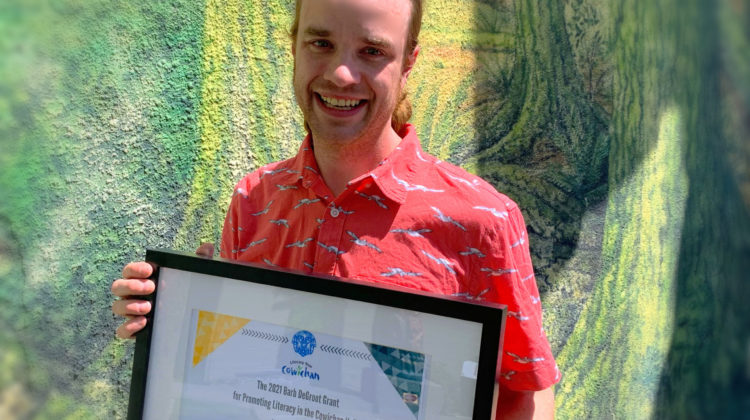 Pivot Point is a social service agency for children and adults with Autism and diverse abilities throughout the province. Graham works at the Duncan office on Trunk Road near the Trans Canada Highway.

He works as the lead instructor in a class with four boys, aged nine to twelve, who are all living with Autism Spectrum Disorder.

“All of my boys are ones that tried the public school system and it just didn’t work out for them,” Cannon says. “In my room, stuff works for these boys and we have a good time being here.”

The award is presented with a five hundred dollar grant which will be used by Cannon to support literacy in his classroom.

Cannon was surprised to find out he had won the award after being nominated by a coworker, “I have never considered myself to be the type of person who could win a grant. I just wake up every day and try to get as much good done in that day as I can.”

In a release, Literacy Now Cowichan says that Cannon finds creative, alternative methods to help his students get excited about literacy and learning. They say he uses things like ‘Dungeons and Dragons’, violence-free superhero comics, video games, and science experiments to build an individually crafted bridge to learning for each of his students.

The award is named after Barb de Groot who started teaching in the Cowichan Valley in 1978, mainly at Quamichan Middle School. Until 2005, when she put down her chalk and decided to run for the school board. Except for a brief hiatus, she has been on the board since then.

The award is to honour her long career and advocacy for literacy. She was a founding member of Literacy Now Cowichan in 2007 and has been chair of their board until now as she heads for retirement.

“Once the decision was made, we were delighted to discover that Graham had actually been a student of Barb de Groot’s when she was the librarian at Quamichan Middle School,” Lewinski says. “What a wonderfully ‘full circle’ way to honour all that Barb has done to promote education in our community!”