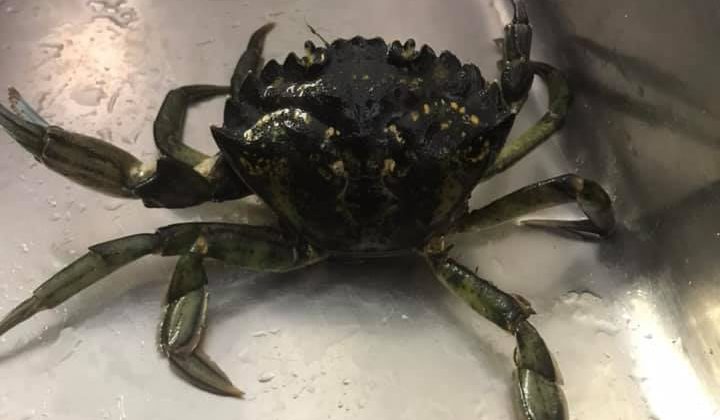 A member of an invasive species of crab was caught Tuesday (June 22) near Ladysmith and turned over to the Department of Fisheries and Oceans, which is considering its next steps to investigate whether the crabs are finally taking up residence in local waters.

It’s believed the European Green Crab first arrived in BC in 1998, and it now populates the west coast of Vancouver Island and the central coast.

Thomas Therriault, a DFO invasive species expert, says it’s been found nearby in the past, mostly in northern Puget Sound, but doesn’t appear to be established in the Salish Sea.

“We don’t see any evidence of local population growth or local reproduction, there’s no evidence of multiple age classes, we’re not seeing them in large numbers, like we do on the west coast.”

Therriault says if the population does take off here, “there could be negative consequences” for the Salish Sea.

The crabs have no natural local predators and can destroy eelgrass beds, an important part of the aquatic habitat used by many local species.

Therriault says there is also competition with native crab species for food, as well as predation.

Stephanie Irvine of Ladysmith says the crab was caught by her husband while he was harvesting oysters near Ladysmith.

Being familiar with European Green Crabs and understanding the threat they pose to the local marine environment, they immediately handed it over to the DFO.

Irvine says the crab is a voracious hunter of other crabs and shellfish with no natural enemies in this region.

She worries that the rising ocean temperature means they are here to stay “because things are not changing, our waters are definitely different than what they were years ago.”

Therriault says the crabs feed on mussels and clams because their shells are softer than oysters, but could still pose a threat to juvenile oysters that have yet to develop thick shells.

He says it you see or catch a European Green Crab, the DFO would like you to report it.

However, Therriault warns against catching or killing just any crab that looks green.

He says you can recognize the European Green Crab by the very distinctive sets of five points on either side of the front of their shells.

As for whether they’re good for your summer seafood buffet, Therriault says he’s heard some recipes have been developed on the east coast, but he doesn’t think the crabs are as tasty as our local species.