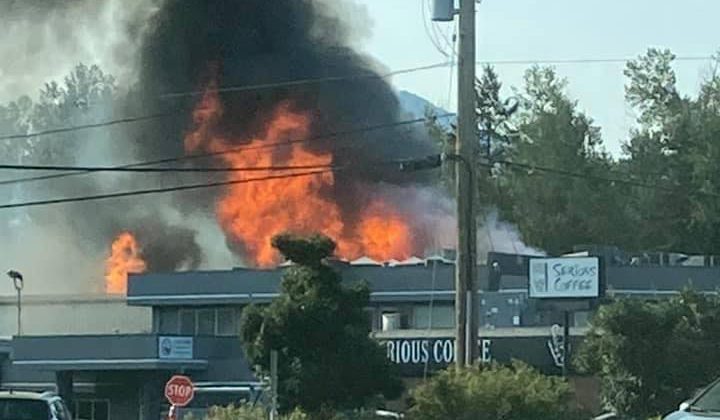 Photograph courtesy of Daphne Swift
The quick actions of two RCMP officers in Duncan helped save lives and prevent a structure fire from spreading to other buildings, the tinder-dry forest nearby, and a neighbouring campground and RV park.
Corporal Cari Lougheed of the North Cowichan-Duncan RCMP says the officers were doing a foot patrol Tuesday evening in an area between the Cowichan River and industrial buildings along Boys Road.
She says that at about 6 pm, the officers spotted smoke coming from a building in the 29-hundred block of Boys Road.
Corporal Lougheed says there are several businesses at that location and the officers quickly began evacuating people while the Duncan Fire Department rushed to the scene.
The nearby Duncan RV Park and Campground also had to be evacuated.
Firefighters were able to get the blaze under control and extinguish it by about 8 pm.
At one point, the flames could easily be seen by drivers passing on Highway-1, and the column of smoke was visible for several kilometers.
The cause of the fire is under investigation.
The North Cowichan-Duncan RCMP is asking anyone with information or video that may help the investigation to contact the detachment at 250-748-5522 or Crimestoppers at 1-800-222-8477.