Cross Atop Mount Tzouhalem Removed in Act of Vandalism 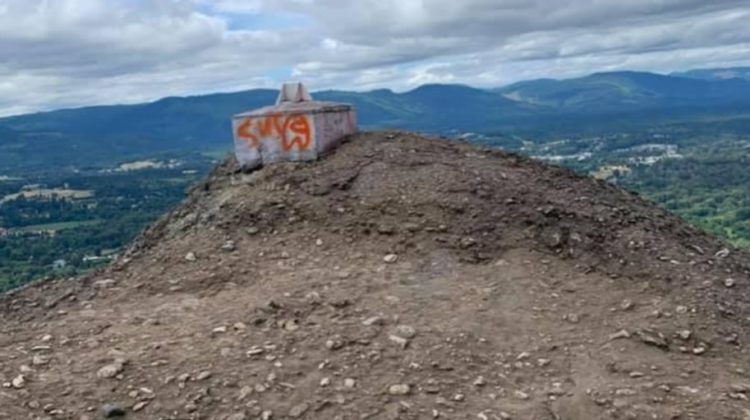 If you looked at Mount Tzouhalem over the weekend, you may have noticed something missing.

In a Facebook post, North Cowichan Mayor Al Siebring says the cross on top of the mountain has been removed in an act of vandalism. He says the act was clearly intentional as it appears a grinder was used to cut the cross at its base.

For decades, hiking the grueling mountain to reach the cross was a rite of passage. The steel cross that was removed had been overlooking the Cowichan Valley since 1988, with reports saying a cross has been in that spot since as early as the 1950s.

Siebring says there is no idea as to who removed the cross or why, and is clear to say they don’t know this is related to the church burnings, statue destructions, and burning of the totem at the Malahat lookout.

However, he says the arena of public speculation could link the events, which he hopes isn’t the case.

“In our present cultural context, that’s where our minds go.
I truly hope that’s not the case,” he says. “We absolutely don’t want or need that kind of behaviour in our Valley.”

The mayor quoted the recent release from leaders of nine First Nations on South Vancouver Island that distanced the Aboriginal community from these acts of violence and vandalism by condemning them.

The statement read, “These events have brought violence and vandalism to our region and communities. The damaging of property including statues and totem poles is unacceptable. We are all residents of this region, and we need to respect each other. We… need to work together towards the goals that strengthen our community and bonds with each other.”

The mayor wrote in unity with First Nations peoples regarding their responses in the comment thread on his post.

“Many of the comments were from Cowichan people who are very upset with the loss of the cross, regardless of how it happened,” he writes.”It’s worth noting, for the record, that most of the ‘statue vandalism’ has been done NOT by First Nations people, but by folks who claim to be supporting those people with their actions.”

He says he had to turn off the comments due to inappropriate comments that were starting to surface.

No word yet as to if the cross will be replaced.