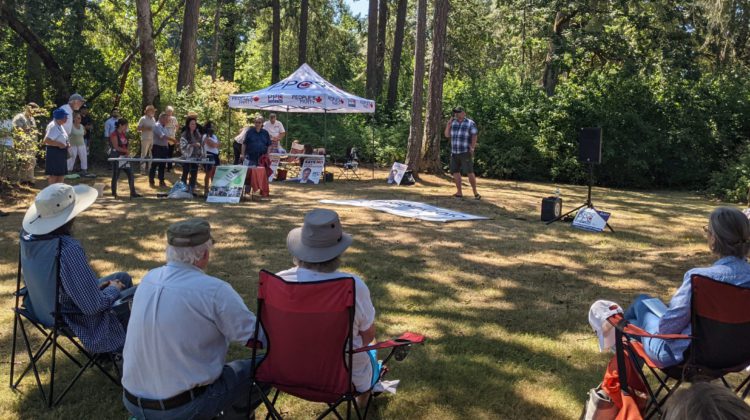 The PPC was established in 2018, after Bernier failed in an attempt to be the leader of the Conservative Party. He lost to Andrew Scheer in the final round of elections by 0.9% of the vote after winning the first twelve rounds of the race. After a year with the Scheer-led Conservatives, he left to form his own party.

In the first election cycle, only a year after their inception, the PPC captured 1.6% of the popular vote – around 291-thousand votes – which is a feat that took the Green Party twenty years and six elections to accomplish.

“Our challenge is, a lot of people don’t know that we exist. That’s a nice challenge,” Bernier says.

Around 150 people turned out to see the party leader, which Bernier says is around the same amount they normally attract in smaller towns. This was part of a stretch of thirteen events in eight days across Western BC and the Island.

“I was very happy, a Monday, during the week at 1pm, for a little town like that [Duncan], it’s about the average actually,” Bernier says on the turnout.

One attendee, Jane, says the draw for many to the PPC is a shared set of values that aren’t represented in other parties.

When asked about what she thought Bernier would do for BC, she says, “I’ve never thought about it specifically for BC. I’m thinking about it more from a Canadian point of view because I’m a patriotic Canadian and I just see him as representing Canadians.”

The event spoke against globalism, the party being under attack from the mainstream media and mass immigration. The crowd cheered at the prospect of the re-election of Donald Trump in the U.S. and booed when hearing the name Justin Trudeau.

The event featured several speakers from the party who are set candidates in the next election cycle.

The speakers list included Mark Hecht who is set to run in the Cowichan-Malahat-Langford riding. Hecht was a professor for Mount Royal University in Calgary, teaching Geography.

Hecht spoke about ‘being cancelled’ and losing his job for writing an opinion piece in the Vancouver Sun titled , ‘Ethnic diversity harms a country’s social trust, economic well-being, argues professor.’ The piece is still available on the Sun’s website. The newspaper wrote an apology for publishing the piece and published a rebuttal op-ed the next day.

Other speakers were Mark Friesen, candidate for Saskatoon-Grass, who operates the Forum for Canadian Sovereignty, which he boasts is the only non-profit organization in Canada opposing globalism; Richard Brent Wintringham who was cheered as a ‘recovering socialist’; Kimberly Brundell a candidate for the Coquitlam-Port Coquitlam riding; and party leader Maxime Bernier.

Bernier told some attendees that his goal isn’t to be Prime Minister, but to make sure that his party’s values are being represented in the House.

Bernier’s ideas have drawn a fair share of legal problems. After an event in Winnipeg earlier in the summer, Bernier was arrested for hosting an outdoor gathering of more than five people and not complying with the 14-day quarantine restrictions Manitoba had in place.

He is also suing lawyer Warren Kinsella, who Bernier claims slandered him in the lead up to the last provincial election. Bernier claims the Conservative party paid Kinsella 22-thousand dollars per month to discredit the PPC. He says Kinsella untruly said the PPC was a racist, Nazi party and that Bernier was a racist.

Other critics of his party say he’s anti-immigration, anti-vaccine, and a climate change denier.

“We believe in sustainable immigration, not mass immigration,” Bernier says on immigration. “We want newcomers that are coming here in Canada, they must share our Canadian values, they must be able to integrate into our society, but we don’t want that mass immigration that the Trudeau government will impose [on] us. 450-thousand immigrants every year in Canada, it’s like a new New Brunswick every two years.”

On vaccines, Bernier says he won’t be taking the vaccine because statistically as a 58 year-old man in good health he has a low chance of dying, should he get Covid.

“I’m pro-choice, everybody must be able to decide with the right information if they want the vaccine or not,” he says. “They are looking for implementing a vaccine passport. We don’t want that because it will create two classes of citizens. The ones that are vaccinated and the ones that are not vaccinated. So some of them will have some privileges and others not. So if you believe in equality before the law, if you believe in a freedom of choice, you cannot impose that in Canada, we are not a Communist country.”

“I know that the climate is always changing and it will always change,” Bernier says. “But I don’t think that we must have policies that will kill the economy, to fight climate change. I don’t believe that we are in danger because of climate change… Canada represents less than two-percent of the [greenhouse] gas emissions, and you can do your best, but you cannot save the planet. When the other politicians are saying that they will save the planet by imposing [on] us a carbon tax, they are lying. Because China and India are the big emitters.”

On Indiginous issues, he says, “First of all, we will stop giving money to other countries to fight climate change, and in Africa to build roads, and we will bring back that money here in Canada because we have people in reserves that cannot have drinking water. So there’s a lot of things we can do there. But the most important [thing] will be also to have a new relationship with the First Nations.”

Bernier says a new relationship would start with abolishing the Indian Act. “When people are saying that this country is a racist country and there is systemic racism in this country, that’s not true. But they have a point, the only racism that you can find in Canada is in the Indian Act. The Indian Act it’s a racist act, it’s based on race, so we must abolish that.”