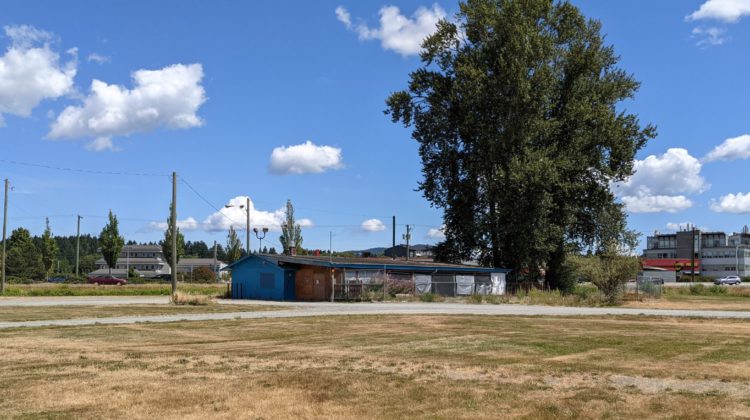 The current home for the CWAV Women's Night Shelter. They've been told they need to find a new home as of Sept. 1. - Photo by Nicholas Arnold

The Cowichan Women Against Violence (CWAV) are asking for help looking for a new home as of September 1st for their women’s night shelter.

“The main thing is our concern for these women, and women-identifying people, who are precariously housed, and the thought of them being without any shelter as of September 1st is very upsetting and concerning for us because we’re seeing them improving so much and taking their lives into their own hands,” says Jan Bate, executive director of CWAV. “It’s really, really important for the whole community that we find a place for these women.”

Since December of 2018, they’ve been housed in the concession stand at the old baseball diamond just off the TransCanada near Vancouver Island University. The land was leased out on a temporary basis from the school district, who now need the land for the new high school.

“They’ve been really wonderful,” says another executive at CWAV about the school district. “They gave us the space to support us through the cold weather. We got the extension, but the whole time we knew it was just a temporary contract.”

The shelter is aimed at helping women who are experiencing homelessness, but has seen a transformation during the pandemic. The space housed fifteen women per night during ordinary time. During the pandemic, however, they say restrictions forced them down to eight beds per night, and that allowed them to make the program more of a community by implementing a full-time program.

“We started as a cold weather night-to-night shelter, and then we got the extension to be year-round, night-to-night. And then just because of Covid, we were able to change the operations to be open 24-7,” the executive says. “We would like to keep that going, rather than going back to beds in an open room where it’s first-come-first-served and they’re rushed out the door.”

They say the beds have been full since the program started, and they have a waitlist of around twenty-five people at any given time. They’d like to expand their program with space for a few more women per night, but say due to their dire need to find a new home by September 1st, they are willing to – and say based on how they transformed a concession stand they can – make any space work.

“To be honest, I think we can make anything work. A commercial rental, a house lease, anything and all in between,” says another executive. “Ideally, for me, I would love to have a house with a yard. Where we can do gardening and just have a place for women to live and be. The clients we have right now, they don’t consider themselves homeless anymore. They think they are housed because of that 24-hour operation.”

CWAV has been in contact with the mayors of each Duncan and North Cowichan, along with the Cowichan Housing Association, who they say have been very supportive of their dilemma.

However, they are asking anyone who may know of any spaces available for lease to reach out to them. You can find their contact information here.