Malahat Lookout Totem Taken Down For Refurbishing After Arson Attempt 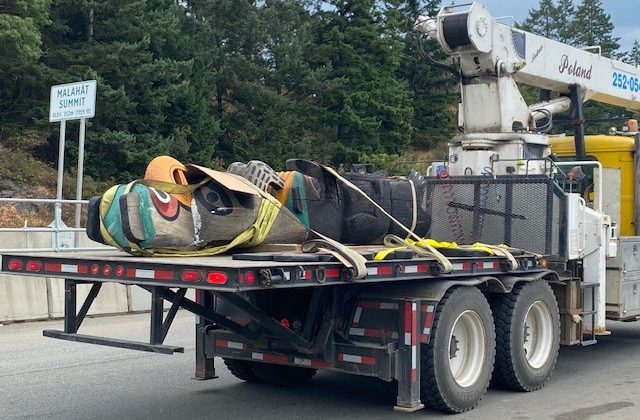 Malahat Totem that as it was removed on Saturday. - Photo City of Duncan

A private ceremony was held at the Malahat lookout on Saturday to mark the temporary removal of the totem.

The totem is off to be refurbished after having been set on fire on the morning of July 2nd, believed to be in retaliation for the removal of a colonial statue in Victoria.

The refurbishing is being paid for by the Ministry of Transportation and Highways. This is the second time it has been touched up in recent years, getting a refurbishment in 2015.

The fire of the totem was put out quickly, thanks to some passersby, but had sustained some damage in the form of burn marks near its base.

The Salish Bear Totem was carved by Stan Modeste as part of the 1966 Route of the Totem centennial project. Modeste, who has since passed, served as chief of the Cowichan Tribes for two terms.

The city of Duncan had been working with Cowichan Tribes, and Elders, along with the Modeste family to ensure that all cultural protocols are being followed.

The city said in a statement, “We are thankful for the words that have been shared from South Island Indigenous leaders in their recent statement regarding this totem and the related event that took place in Victoria and join them in their call for all of us to ‘join on the road to healing. We need to walk together, support each other and demonstrate humanity.'”

The city says any memorial items that were placed at the totem will remain in its abscence.