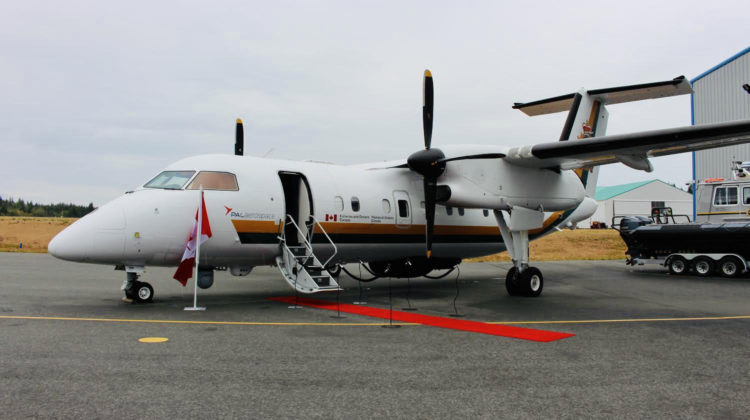 The DFO is celebrating its new maritime patrol aircraft -- the Dash 8 -- based out of Campbell River (Photo: Ethan Morneau, staff)

The Department of Fisheries and Oceans Canada is soaring to new heights, celebrating its new maritime patrol aircraft based out of Campbell River.

“We’re really excited,” says Regional Director of Conservation and Protection, Nicole Gallant. “This is its home here in Campbell River. We’re really proud of that.” 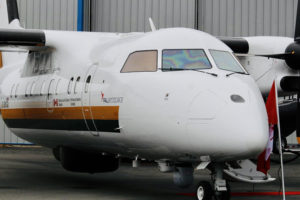 The aircraft — known as a Dash 8 — landed late last month. And just one day after its arrival, crews were already out on missions, utilizing the new jet.

“Dash 8 arrived on July 21st,” Gallant tells My Campbell River Now. “We’ve been waiting for it to arrive, we knew it was coming. It replaces our King Air that we’ve been using for the last 20 plus years.”

In a partnership with PAL Aerospace, Gallant says the Dash 8 takes over King Air’s duties. It’s expected to improve Canada’s maritime security, patrolling marine and inland waters within the Pacific region, as crews onboard ensure fishers down below are following regulations.

“That means that we’re going to have food security for years to come,” Gallant explains. “It’s a really important role that fishery officers have for Canadians.”

And the new aircraft comes with its perks: Local detachment commander Joe Knight says the Dash 8 has ‘much more’ capabilities compared to King Air. “It’s a bigger plane, it’s more comfortable, it has a longer range, it’s got better technology on it. All around, everybody’s pretty happy,” he says.

According to Regional Director Gallant, the high-range Dash 8 can get crews farther, increasing patrol times.

“We don’t have to land for fuel anymore, we’ve got new technology onboard, stronger radar, and more capability to be able to see what’s going on out in the water when we’re up in the air,” she says.

Gallant continues, “This plane can get about 10 to 11 hours of distance. We can get all the way out to our 400-mile limit, and out beyond into the international waters. This plane will also be used domestically and internationally to help fight unlicensed, unregulated illegal fisheries.”

Plus, the Dash 8 is being housed in a brand new hangar. PAL Aerospace’s new hangar, located beside the Campbell River Airport, is now operational, sheltering the aircraft when it’s not soaring above. 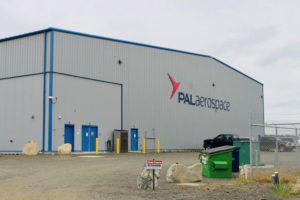 The PAL Aerospace hangar is located next to the Campbell River Airport (Photo: Ethan Morneau, staff)

“We’re really proud to have this establishment here because it’s giving us that partnership that we need. Our fishery officers with Fisheries and Oceans Canada are based out of here also, who are on this platform on a daily basis,” Gallant adds.

Back in 2019, the DFO announced a five-year, $128-million contract with PAL Aerospace to deliver a new fleet of four aerial surveillance aircrafts, including two long-range maritime patrol aircrafts (Dash 8). In addition to the new hangar in Campbell River, the planes fly out of bases in St. John’s, Newfoundland, and Halifax, Nova Scotia, patrolling waters Canada-wide.

Interior shots (Provided by the DFO)