No Growth in Copper Canyon Fire Size; But Still Out of Control 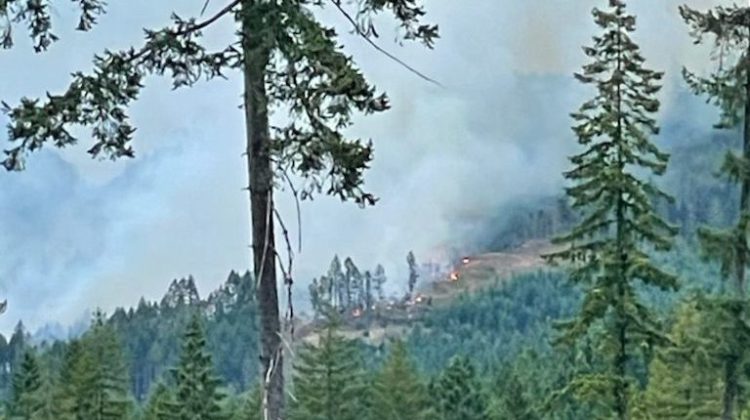 Deputy Mayor Rosalie Sawrie has been North Cowichan’s point person as Mayor Al Siebring is still vacationing. She says the fire saw no spread last night due to the rain and cooler temperatures, but a concern is on the horizon.

“It didn’t spread overnight, so that’s good,” Sawrie says. “The winds are a concern for sure. There’ve been gusts of up to 25 kilometres [per hour].”

“It’s still out of control, we did take a little bit of rain last night, which was great,” Jakobsen says. “We also had support from a seven member para-attack crew which flew down from Fort St. John in a fixed wing aircraft and parachuted in adjacent to the fire and set up camp and overnighted on the fire last night.”

She says the reason why parachuters were called in was solely to reach areas that are hard to access by traditional fire crews.

Jakobesen says the fire is suspected to be human-caused, but will have a further investigation to be certain. Jakobsen adds she’s not aware of any further spread of the fire today.

“We’re taking very aggressive action on that fire today. We’ve got five helicopters, five water tankers, three pieces of heavy equipment, thirty firefighters, and one structural protection unit – which has deployed sprinklers around the one home that is under evacuation order.”

As for further relocations, Deputy Mayor Sawrie was clear that there has been no further need to evacuate after yesterday’s one property evacuation order.

“It was just the one household and they voluntarily evacuated pretty quickly,” Sawrie says. “It’s relatively – I’m not going to use the word contained, because that’s not the word they used today – but again, it’s in good shape that it didn’t spread overnight and so things are okay right now.”

Sawrie says it’s very important not to speculate on details, and to wait and look for accurate, credible and up-to-date information.

“There’s lots of speculation happening on social media… For accurate information, the CVRD (Cowichan Valley Regional District) will be the lead on communication. So they’ll be updating twice a day on their social media and through their email system,” Sawrie says. “The best way people can get notified directly is through Cowichan Alert.”

CVRD updates are scheduled for around nine in the morning and six at night. Cowichan Alert is a relatively new system, through the Alertable app, which sends direct information and updates surrounding natural disasters and other advisories. You can find the download link here.