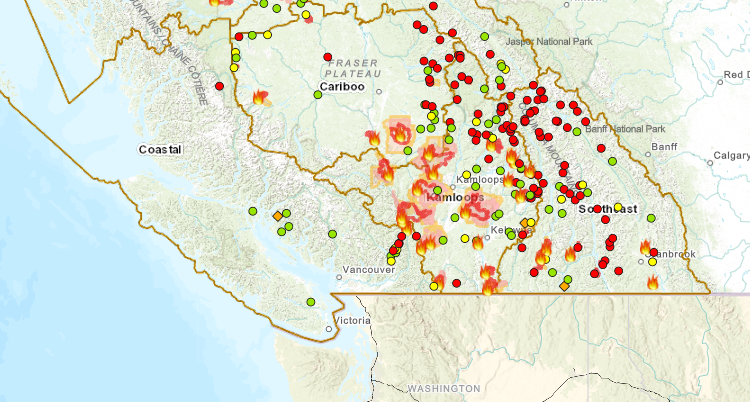 BC Wildfire dashboard as of noon on Aug. 16th. (Supplied by BC Wildfire)

With just 20 active fires, most of which are under control, the coast’s wildfire situation is tame compared to the B.C. Interior.

Coastal Fire Centre information officer, Marg Drysdale, says a big reason for that is crews being able to jump on fires quickly before they get out of control.

“I would just like to thank the public,” Drysdale said. “We have had some very quick reporting of fires, and what that means is if they’re reported quickly our crews can get on them quickly and we are able to manage them. If they get to a point where they are larger than what we call initial attack capacity, then it becomes more problematic for us.”

We’re also lucky, she added, because we don’t have the same kind of vegetation as they do in the interior.

However, she said, even with the rain we got in some spots on Sunday, it’s still dangerously dry, with all of Vancouver Island and much of the Sunshine Coast locked in Level 4 drought conditions.

“We are not getting the amount of rain that we require in order to deal with those conditions, so we are asking everybody to please, continue to report if they see a fire, do not have any open fire, it is prohibited throughout the Coastal Fire Centre at this point, with the exception of campfires being allowed in Haida Gwaii, and please be very cognizant of what you are doing in forested areas,” Drysdale said.

She said this time of year can usher in a false sense of security because, as the odd showers move in here and there, people tend to let their guard down.

“People assume that fire season is over as soon as we hit the September long weekend, people assume that we are not contending with fires when there is a downturn in the weather,” Drysdale said. “In some areas we will be getting showers, in some areas we may get trace amounts, and in other areas we may get no precipitation whatsoever, so we are asking people to please continue to follow the prohibitions in place.”

Drysdale also points out that while we haven’t had any major fires, it’s actually been a very season, overall in the Coastal Fire Centre region.

“We have gotten more fires this year than we did last year, and we are higher than our 10-year average.”

“So we have been getting the fire starts,” Drysdale said. “We acknowledge that we are getting more human caused fires, but due to quick reporting and a strong initial attack response to get on these fires very quickly and deal with them. So we are getting more fire starts, we do have drought conditions, and we do need the continued support of the public in following all prohibitions.”

There are just over a half dozen active fires on the island and Sunshine Coast.

There is a cluster of small fires caused by lightning strikes north of Powell River. Drysdale says they’re all considered largely under control.

Down island, crews continue to battle the 32-hectare Copper Canyon fire, which is also considered under control. Drysdale says there are 20 firefighters, three water tenders, one piece of heavy equipment and one helicopter assigned to it.