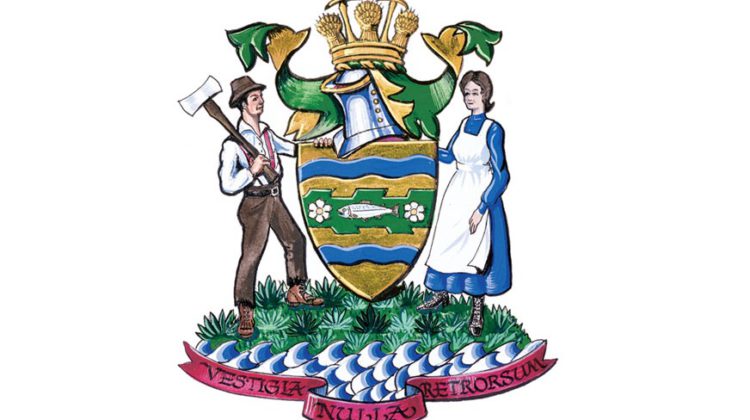 The district of North Cowichan will be voting on removing the coat of arms from use later this week.

Barb Floden, Manager of Communications and Public Engagement, submitted the proposal to the council agenda.

The coat – depicted above – approved in 1988, but hasn’t been in widespread use since 2014. It features a logger and a pioneer woman standing beside the shield with a sockeye salmon on it. The words “No Stepping Back” are written in latin underneath.

“The motto, Vestigia Nulla Retrorsum (“No stepping back”) is also problematic in the era of reconciliation,” the discussion portion of the proposal says. “The motto, together with the colonial elements and settler imagery of the coat of arms, makes no mention of the First Nations who inhabited the area at the time of first settler contact and instead alludes to a ‘new’ era in which going back is not an option.”

The proposal, which recommends the retirement of the symbol, states that this decision would fall in line with one of the six priorities outlined in the 2019-2022 Council Strategic Plan, which is to “have safe, inclusive and inspiring neighbourhoods.”

It also cites Call to Action 47 from 2015’s Truth and Reconciliation Report, which called upon all levels of government to repudiate concepts used to justify European sovereignty over Indiginous peoples and lands.

The vote will decide to retire it from the few locations and situations that it is still used in. Other options are to “pause the use of the coat of arms, pending a more fulsome review of the history, impact of, and consideration of additional options, which could include the creation of a revised coat of arms,” and to keep it at its current level of use.

Notable uses listed are on a sign at the municipal hall, in the municipality’s official seal, and at a number of older signs throughout the district.

It will head to a regular council on Wednesday, more information can be found here.