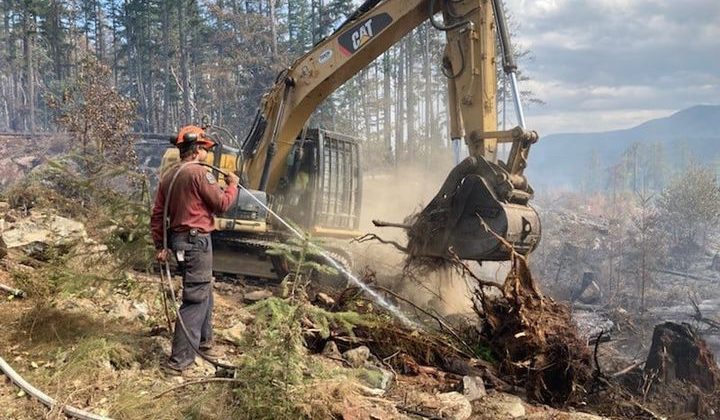 Photograph supplied by BC Wildfire Service

The BC Wildfire Service says the Mt Hayes fire, located just northwest of Ladysmith, is ‘being held’ and is not expected to spread under the present conditions.

The size of the fire is now 73 hectares.

According to a spokesperson at the Coastal Fire Centre in Parksville, firefighters “completed a hose lay yesterday around it, so now they are working on widening out that wet line, that strip of fuel-free wetted down around the fire.”

Crews will continue working to remove fuel and digging out hot spots, and the dry condition of the forest means this work will take some time.

The BC Wildfire Service says area residents will continue to see smoke coming from the fire for a while yet.

The CVRD and Regional District of Nanaimo’s joint Evacuation Alert for properties on Takala Road, David Road, and Ivey Road remains in place at this time.

The fire, which began on Thursday, quickly grew to 70 hectares by Friday morning but did not significantly increase in size over the weekend.

The Mt Hayes wildfire is located about 4.5 kilometres northwest of Ladysmith.