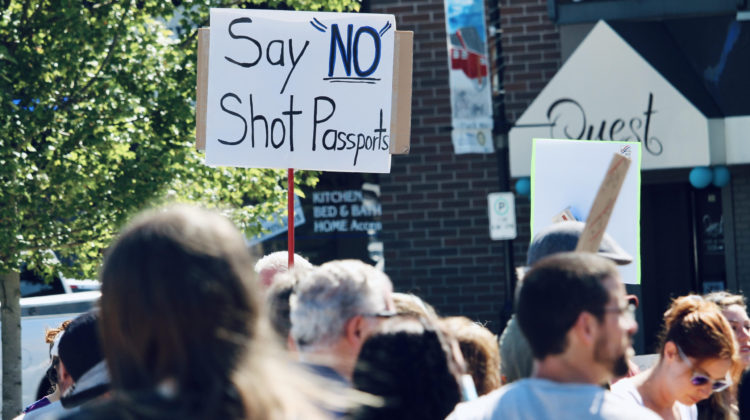 Sue Beckman was the voice behind the megaphone. Looking out at the crowd, she said over 300 people showed up, expressing their opposition to proof-of-vaccination while also practising freedom of speech.

“We just need to stand up and say no,” Beckman told My Campbell River Now. “Whether you’re vaccinated or not, we still think what the government is doing is wrong.”

Come Sept. 13th, eligible British Columbians aged 12 and older will need proof of at least one dose of a COVID-19 vaccine to attend social and recreational settings and events, including restaurants, casinos, and fitness centres. By Oct. 24th, B.C.’ers will need proof of both doses. Many drivers honked as they passed by, with protesters holding up signs that read “Your Body, Your Choice” and “I’m Not Anti-Vaxx, I’m Anti-Mandate.” Another had the words “Medical Freedom” written across.

But the rally actually extended beyond. The crowd took to the streets, following behind Beckman in a parade-like fashion, looping around downtown via Shoppers Row, then to the Island Hwy. with a final stop back at the Square.

One protester, Lynn, said she was “so proud of Campbell River and how many people came out.” She continued, “People are starting to wake up and I’m really excited.”

Meanwhile, Andi said she attended to support her mom, who can’t get the vaccine for health reasons. “I don’t think it’s fair for her or anybody that physically can’t get it to be forced to get it, and have their way of life ruined,” she added.

Other communities across Vancouver Island also saw protests against ‘vaccine cards’ today. Many were held outside local hospitals.

Following these protests, Island Health President and CEO, Kathy MacNeil issued a statement, “I am proud my country supports the democratic right to peaceful protest. However, some of today’s protests disrupted safe access to healthcare facilities. Members of Island Health care teams were verbally abused as they came to and left work during these protests, and in at least one case a healthcare team member was physically assaulted.”

MacNeil said what happened to healthcare teams is “not acceptable to me nor to the people and communities they serve.” She added, “Our healthcare teams deserve respect and support, no matter what personal beliefs we hold.”

He continued, “The intent of every COVID-19 guideline and restriction that we’ve put in place since the beginning of the pandemic is to keep people healthy. That remains our number one priority and we will take the steps we need to, to save lives and keep people safe as the vast majority of British Columbians expect.”