Conservative Party Popularity Rises But Election Not Expected to Change Much 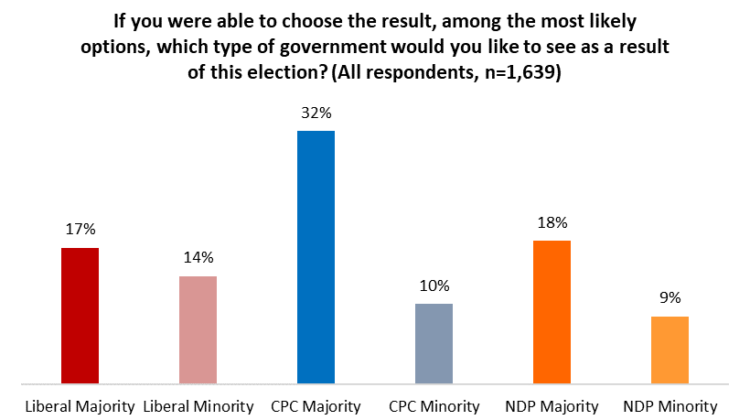 The latest public opinion survey from the Angus Reid Institute reveals more than 40-per cent of Canadians overall would prefer to see the Conservative Party win the federal election, but roughly half expect another Liberal minority government.

Forty-nine per cent of respondents feel the election will end in a way that largely mirrors how parliament looked when the writs began being issued on August 15.

One-in-nine (12%) expect the Liberal Party to turn things around to win a majority, while one-in-three (34%) expect a conservative government.

When asked what result they would prefer, 42 per cent want to see the CPC take over from the Liberals,. 31 per cent would like the Liberal Party to govern again, while 27 per cent want Jagmeet Singh and the NDP to win.

The Angus Reid Institute says a majority of people in Alberta and Saskatchewan want to see a Conservative majority, but nowhere else in the country do a majority of voters agree about which party should win the election.

Four in five Liberal voters (84%) expect their party to win, while two-thirds of CPC voters (64%) believe their party will win, and just 14 per cent of NDP voters expect the NDP to come out on top.

The Angus Reid Institute conducted an online survey from Aug. 27 – 29, 2021 among a representative randomized sample of 1,639 Canadian adults who are members of Angus Reid Forum. For comparison purposes only, a probability sample of this size would carry a margin of error of +/- 2.5 percentage points, 19 times out of 20. Discrepancies in or between totals are due to rounding. The survey was self-commissioned and paid for by ARI.