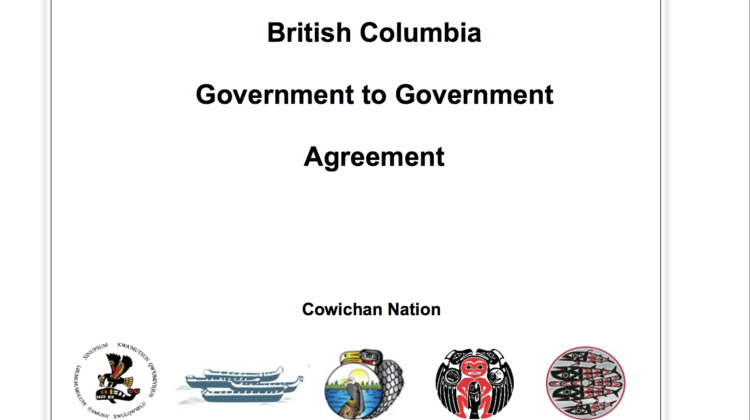 The Cowichan Nation and the provincial government have signed an agreement to work toward self-determination and self-government for the nearly eight-thousand members of the First Nation.

Murray Rankin, Minister of Indigenous Relations and Reconciliation, and other provincial cabinet ministers represented the province.

In a news release, the provincial government says the agreement establishes formal governance structures, including annual leadership meetings between Chiefs and ministers to strengthen the collaborative working relationship, and a forum to identify issues or concerns early and work proactively to find solutions.

The province will cooperate on implementing Cowichan Nation laws, traditions, customs and practices, advancing self-determination and self-government, co-operative decision-making and dispute resolution, and identifying opportunities for economic and socio-cultural well-being.

A board to oversee implementation will be established.

Stz’uminus First Nation Chief Roxanne Harris says it’s “important for our Nation to move forward and be progressive, to blaze a trail for our future generations,” and Penelakut Chief Joan Brown calls the agreement a “stepping stone of combined efforts of further developing a relationship with the Province and the recognition of the Cowichan Nation’s Rights and Title.”

Chief Seymour of Cowichan Tribes thanked the government for working with them, but added that it’s a bit of a process and the Nation “shouldn’t have to do this for our Aboriginal Rights and Title.”

Rankin says that he is looking forward to addressing challenges collaboratively and to build opportunities that benefit all members of Cowichan Nation.