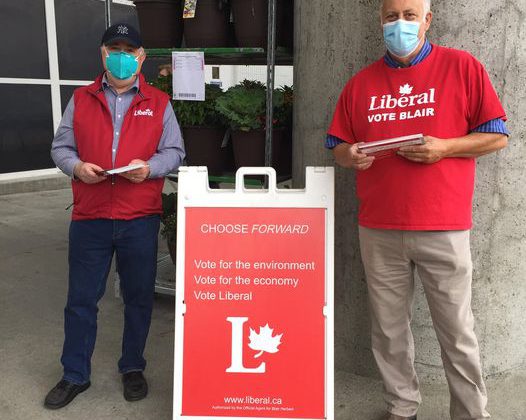 The Liberal Party of Canada’s Blair Herbert and his wife Karen have a small farm and produce eggs in the Mill Bay area. Herbert has been a small businessperson in the home building and Real Estate Brokerage business. In his earlier years, he gained experience working as an RCMP officer in Northern Saskatchewan.

My Cowichan Valley Now: If elected, what steps would an NDP government take to deal with the lack of affordable housing?

Herbert: “We are in a situation here in the Cowichan Valley where the housing market has changed considerably in the last 18 months. We’ve seen a huge rise in prices and it basically falls down to the problem that we don’t have enough houses. We have a real supply shortage here and in order to change that supply situation, it’s a long-term change. You can’t just put up a hundred houses tomorrow and get them going, it takes a lot longer than that. As far as the federal government is concerned we do have a housing program across the country where we’re looking at building 1.4-Million houses, that is a huge program and one of the issues is that we don’t want to really affect the market by taking all of the builders out of the marketplace and focusing them over here, although it’s not a bad thing, but there’s all the regular building that should be going on. The price of it would increase further because there would be a shortage of labour in that situation, so it’s a bit of a balance. Part of the problem we have here in the Cowichan Valley locally is that some of the local governments have really restricted supply of new housing coming on stream and that leave us in a real short supply situation. We would try to rectify the situation by putting pressure on the local municipality government to get things moving. One of the issues with our housing supply here right now is a lot of our renters are being dislocated. A lot of the small landlords have one house here and one house there, and with the rise in prices a lot of these landlords are saying ‘I never thought that my rental house would get to be this kind of value, so I’m selling it.’ The person who comes in and buys it is going to use it as an owner-occupied property and the renters are put out onto the street. There is, you know, there’s no supply of rental stock for them to move in and it’s a huge problem up and down the Island that we are going to have to look at, and the provincial government, I’ve mentioned this issue to the provincial government that housing is a provincial responsibility, but it is an issue and we’re going to have to figure out a solution.

My Cowichan Valley Now: If elected, what steps would an NDP government take to deal with Post Pandemic Recovery:

Herbert: “With regards to COVID-19, I think actually that the government and the provincial government have done a fair job of marshaling everyone through COVID-19. One of the issues that we have now is the vaccination process and our numbers are actually pretty good. We have a large segment of the population, which is basically children under 12 who are not able to get a vaccine at this point, and hopefully, that will change fairly quickly. And those people that are medically unable to get a vaccine, so those people are vulnerable. And then there’s a group of people that refuse to be vaccinated for one reason or another and I think that we have to put some push on them to get the vaccine. We run by certain rules in our society, you have to drive on the right-hand side of the road, as an example, you can’t drink and drive, these are all restrictions to peoples’ liberties. But everybody accepts them as reasonable restrictions because your actions impose problems on somebody else and this really isn’t a lot different, so without everyone getting vaccinated to a very high percentage of the population, we’ll be fighting this virus for a lifetime. The virus is here and it’s not really going anywhere. Some of the things that I’ve heard lately, you know people taking horse pills that are designed to de-worm horses and cows, and they’re taking those in an effort to sort of immunize themselves against COVID is, you know, it would be laughable if it wasn’t so tragic. It’s a sort of non-sensical answer to things and we have to get people to accept some responsibility and move on with these things and protect the population. As far as CERB goes, and the wage subsidy for businesses, that sort of thing, hopefully, we are getting close to the end of this pandemic, although our numbers are getting really getting high again and it’s mostly unvaccinated population, hopefully, people will not be going to hospital quite as much as what they used to, but with regards to CERB we have to wait and see. Right now I think they run until about the end of October and if we are still seeing very high issues in people that are still being kept from going to work, those things would likely be extended.”

My Cowichan Valley Now: If elected, what steps would an NDP government take to deal with Climate Change:

Herbert: “As far as the climate goes, you know, my feeling on the climate, which is really why I got into the election, is: ‘the greatest threat to our planet is the belief that somebody else is going to save us,’ that’s a quote from Robert Swann and we have to start making different choices as a population, even on small things from buying a cup of coffee to buying a car, as an example. Instead of asking why alternative fuel vehicles won’t work, we need to start looking at why they will work and I don’t see these as sacrifices or anything it’s just people changing their mindset. The Liberals released a 64-point climate plan and that is the most comprehensive climate plan of any government in the world. Of course, not everybody agrees with that, the Conservatives are still trying to decide it climate change is real and the Green and NDP are calling for radical change, which usually means it’s going to create a lot of chaos and long term damage to the economy. I’m not really supportive of that. We’re in a transition and transitions take time, there are lots of projects, as far as long goals, that we have started. We’re looking at phasing out coal by 2030, commitments have already been made, but again, it takes a while to phase out because you can’t just shut off the switch and leave everybody in the dark, we have to replace that power, of course, with something else, so all of these are long term things, including the car manufacturers have committed to not producing gasoline vehicles anymore after 2035, so these are all good things that are happening. We are making progress on the climate, on greenhouse gas emissions, we have been able to reduce the per-capita rate by approximately 15 percent, which is pretty substantial, and so these things are in place and we are moving really as fast as we can and trying to most faster is a good thing. It going to take as much time as it’s going to take in order to make things happen.”