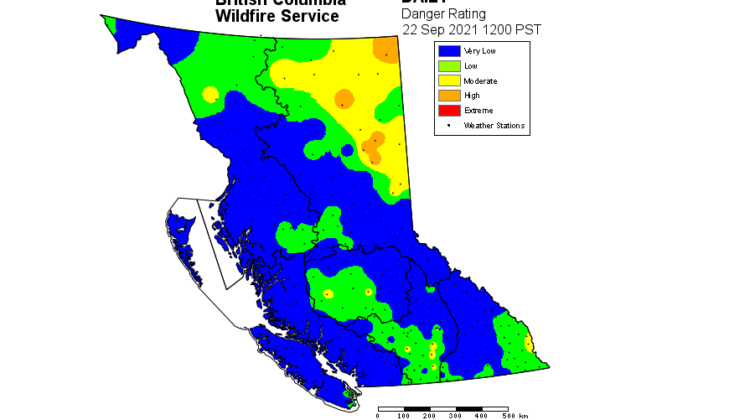 The wildfire season is cooling off on Vancouver Island and the Sunshine Coast.

Thanks to recent heavy rain and the arrival of cooler fall weather, the entire Coastal Fire Centre region is painted dark blue on B.C.’s fire danger rating map. That means the risk of wildfire is very low.

Coastal Fire Centre information officer Julia Caranci said that while the season is nearly in the rearview, it was a busier-than-usual summer on the wildfire front.

“To date we’ve had a total of 210 fires and 7,096 hectares burned,” she noted. “The two years previous to this year were quite quiet, relatively speaking, in the Coastal Fire Centre. For example, at this time last year, we had seen just 1,198 hectares burned, which is significantly less.”

Caranci said the season could have been far worse if not for help from the public, who were quick to report potential fire starts  over the summer.

“We did get into a place where we were exporting many of our staff to other fire centres to help out where needed. Here we did adopt a very quick response orientated way of dealing with fires,” she explained.

“We had a lot of support from the public, probably because of heightened awareness, probably because of how bad the fire season was in other centres compared to here. Our reporting was very good. We adopted a very quick response strategy with IA (initial attack) crews and helicopters and to do that, of course, we really counted on the public to call in those reports, so it worked very well for us this year and we were able to get on all of our fires very quickly.”

The fall rains have also allowed the centre to lift all of its burning prohibitions, effective Sept. 16th. This includes campfires and Category 2 and 3 burning.

With this in mind, Caranci says you should continue to be extremely cautious around campfires.

Caranci stressed that you should always check with your local government first before starting a backyard burn or campfire, because they could still have restrictions in place.

Province-wide, a spring-and-summer-long drought coupled with the historic heat dome in late June helped spark 1,608 fires since April 1st, burning through 867,706 hectares of forest to date.