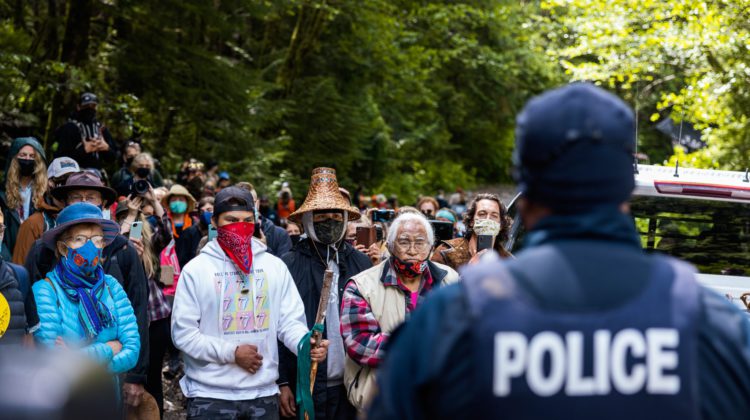 A victory for environmental protesters at the Fairy Creek blockade. Forestry company Teal Cedar has lost a court application that would have required more police enforcement.

As of 4pm today, September 28, the RCMP enforcement of the Teal Cedar injunction at the Fairy Creek Watershed came to an end. This will allow protestors to remain on the Teal Cedar logging grounds without removal from police.

The decision was released today, following a hearing to extend the injunction on September 14-17. The injunction had been in place since the end of April on a six-month term.

The judge presiding over the case, Justice Douglas Thompson, recently released a full statement on reasons for his ruling. Contained within them the RCMP decisions surrounding enforcement of the injunction has given the courts a black eye.

“Methods of enforcement of the Court’s order have led to serious and substantial infringement of civil liberties, including impairment of the freedom of the press to a marked degree,” Thompson says. “All of this has been done in the name of enforcing this Court’s order, adding to the already substantial risk to the Court’s reputation whenever an injunction pulls the Court into this type of dispute between citizens and the government.”

He pointed to the RCMP’s use of the “Thin Blue Line” patch which had been barred by the national RCMP as one questionable decision. The patch was released during police protests that followed the George Floyd killing in May 2020. It symbolizes police as the thin blue line between order and anarchy. He says that some people of Indigenous descent see the patch as symbolic of the RCMP’s involvement in enforcing policies that brought about the genocide of Indigenous peoples.

There were also other issues involving freedoms of press, including the detainment of a reporter covering the protests, which drew some public attention.

The latest Lake Cowichan RCMP update had arrest totals at 1101 individuals, with 110 of those individuals being arrested multiple times (a total of 261 times between them). The injunction saw RCMP officers removing protesters from a myriad of devices, including tripods, locking devices, and trenches.

The activities were highly publicized from both police, through daily press releases, and protestors, on the Fairy Creek Blockade Facebook page.

While the end of the injunction has come, Justice still says that arrests can be made to protestors who break the law, which could include some tactics protesters have used, like digging trenches through roads.