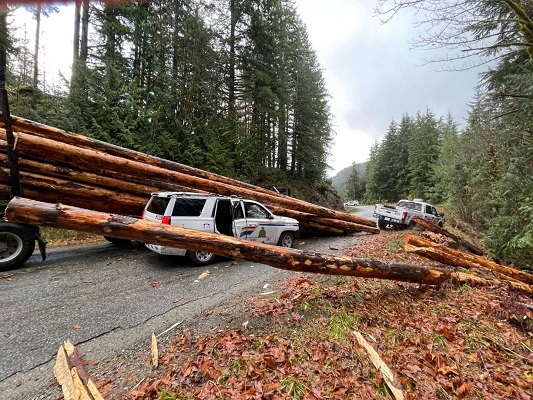 Two RCMP vehicles damaged by a collision with a logging truck. Photograph supplied by RCMP.

An investigation is underway into an accident involving a logging truck and two RCMP vehicles south of Cowichan Lake.

Three RCMP officers were injured and taken to hospital with non-life-threatening injuries.

At around 8 am on Tuesday morning, two RCMP vehicles were traveling southbound on the Marine Pacific Circle Route.

The RCMP says a logging truck collided with one of the vehicles and its logs spilled onto the second police vehicle.

Traffic analysts have been called to the accident scene as part of the investigation.

The officers involved in the accident are part of the team enforcing an injunction against protest blockades on logging roads in the Fairy Creek area.