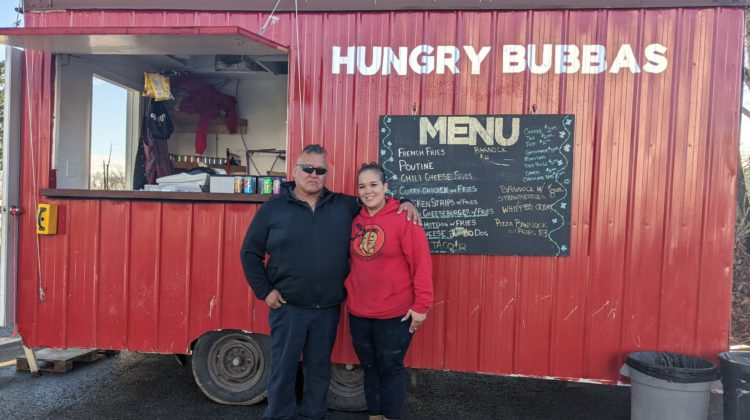 This year has been a tough one for many throughout the province and one local business owner is giving back and challenging other businesses across the Cowichan Valley to do the same.

Adrienne Peter is the owner of Hungry Bubbas Food Truck. She has spent the last two decades working in kitchens but decided to take the leap and strike out on her own this year. The truck was renovated by Peter’s father Bubba Qwulshemut of Somena Nation, who puts the Bubba in Hungry Bubbas. They got started by heading to First Nations across the island following the canoe races.

The bright red food truck is often set up at the old mound site at the intersection of River Road and Government Street. They’re known for their bannock, incorporating it into several items including a bannock burger, a pizza bannock, or topped with strawberry and whipped cream. They also have other delicious dishes on their menu including chili cheese fries and the popular poutine. Peter prides herself on the consistency and freshness of her products.

As a relatively new business, opening this summer, it has really taken off. You’d be hard-pressed to find a time when orders aren’t flooding in.  She’s using her new platform to give back to those in need in the community.

“There’s a lot of people going through a lot of things right now. There’s a lot of devastation everywhere,” says Peter who has a connection to the Wilson family. The Wilsons lost their five-year-old son, Enzo, and their home in a fire on Halloween night.

“[Adrienne] has kids around the same age as theirs, they used to be at each other’s houses often,” says Qwulshemut.

Peter took a week off to mourn their loss with the family and once back to work decided to do something to help. She looked at her menu and saw the poutine was one of her more popular menu items. She decided to raise the price from 8-dollars to 10-dollars, and donate all 10-dollars to the Wilsons.

“The costs are all coming out of our pockets,” says Qwulshemut.

So far through two days, (as of 1:30pm on Friday) they’ve sold 26 poutines, which is $260 towards the Wilson family’s rebuilding efforts. And if you’d like to donate, but aren’t in the mood for poutine, they’re also accepting donations at the site.

Peter says, “Since they’ve laid their son to rest, they have been forgotten about, but they are still needing to rebuild their home.”

She issued a challenge to other business owners across the Cowichan Valley upon reopening on November 17th.

“I would like to challenge all of the other restaurants or businesses to either sell one item out of your store, or create a special, or sell one menu item and donate the proceeds to a family that needs it,” says Peter, who also mentioned the Edwards family that lost their home in a fire on November 12. “Let’s see who is going to be there with us in supporting each other.”

She hopes that her challenge will help some people open their eyes and contribute to the community around them. She says, “I haven’t heard of any business stepping up yet.”

Whether any other businesses will step up to accept her challenge is to be seen, but what is for sure is that this business owner is doing her part to give back.

BC Urges Parents to Register Children for COVID-19 Vaccine