An accident atop the icy Holden Lake in Hemer Park led to a Great Pyrenees dog fighting for her life in icy waters.

On Wednesday, a report of a dog who had fallen through the ice of Holden Lake reached the North Cedar Volunteer Fire Department at around 11am.

Firefighters were able to take her from the water via an inflatable raft, and had her back on shore and in a blanket, where she was then driven to Central Island Veterinary Emergency Hospital.

For three hours, Sakari had the entire hospital’s attention. Teresa Fraser, Practice Manager, says that when it’s a critical emergency like hypothermia, it’s ‘all hands on deck.’

“She received shock rate fluids, she received active warming, she received everything we would give in an emergency,” stated Fraser. “Her vitals stabilized and she was able to go home once she warmed up. She was pretty sleepy but she was feeling a lot better. She ate really well so that was a good sign— get her guts moving— so she warmed up quick after that.” 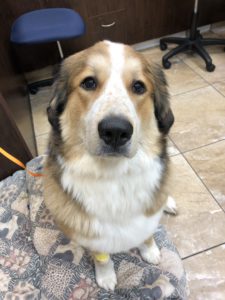 Because Sakari is a Great Pyrenees, Fraser says that she was lucky because of her longer coat keeping her warm. However, that long coat came with a downside.

“She was lucky because of her coat, but only lucky to a certain extent because it was hard for us to dry her. So with a [Labrador Retriever] it would be much easier for us to dry her, because of her thick, thick coat, it took a bit longer,” said Fraser. “Yes it probably bought her some time while she was in the water, but once she got out, it was tricky to get that undercoat nice and dry to warm her core.”

Fraser advises dog owners around lakes to always keep an eye on their dogs the best they can, though accidents do happen.

The owners of the dog say that Sakari is a young dog, only a year old, and gets distracted easily. They do not know what happened to attract her to the ice, but they’re grateful for whoever called in the firefighters to save their dog.