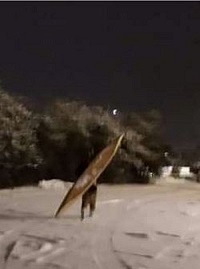 The RCMP is investigating the theft of a child-sized canoe from a daycare centre during the Christmas Break.

The North Cowichan-Duncan RCMP says it was stolen on Boxing Day during the evening.

A man entered the fenced playground of the Le’lun’uy’lh Daycare operated by Cowichan Tribes and carried away the canoe.

The police say another person later shared a photo of a man walking through the snow carrying a small canoe.

After the photograph was shared, the theft was reported to the RCMP.

Investigators hope the witness who snapped the photograph, or anyone with information about the theft, will contact the detachment at 250-748-5522, or Cowichan Crime Stoppers at 1-800-222-8477.

Omicron to peak in Canada the next few weeks, hospital admissions 4 times December’s