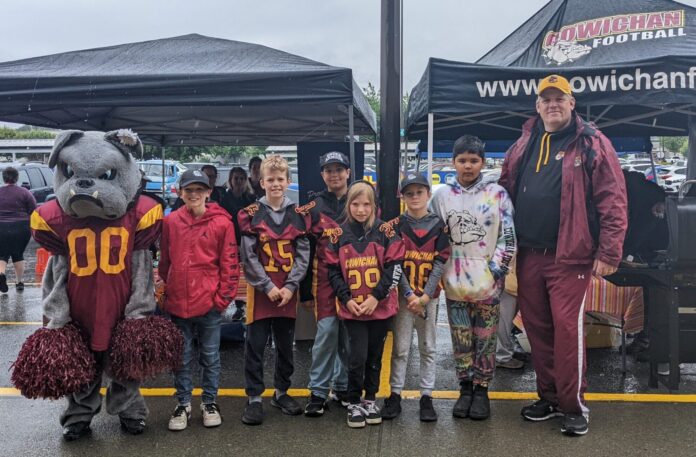 The future of football in the Cowichan Valley are going to have a chance to learn from the best that the Canadian Football League has to offer. The Cowichan Bulldogs atom team will be heading to Vancouver this Saturday to watch the BC Lions take on the Winnipeg Bluebombers.

“They’ll get to play on the field before the game and they might even get a chance to walk out with the players at player introductions,” says Coach Doug ‘Opie’ Williams.

It’s something that Williams has been working on with the Lions staff for quite some time. He says the stars have aligned for the trip to work out.

“It’s the only 4 pm start of the season, so it’s the only game this year that would work for us,” says Williams. “There’s no late ferry that we could make the game and still make it home that night for any other game.”

The trip has a price tag in the neighbourhood of $4,000, so they’ve done some fundraising to help the kids have this once in a lifetime experience.

“We’ve reached out to some alumni and they’ve chipped in around $1,000, but we’ve still got some to go,” says Williams who was out with the team selling hotdogs to raise money in front of the Real Canadian Superstore in Duncan on Sunday where they raised another $1,200.

The atom age group covers those aged 8, 9, and 10. A few of the players made it out to the fundraiser and when asked if they were excited gave a strong yes with some cheers.

They’ll be watching the best that the CFL has to offer, as both the Lions and Bluebombers are undefeated through three games this season. A great example for the future of football to watch and learn from as they continue in their young careers.

If you’re looking to donate you can do so by etransfer to Cowichan Football’s treasurer Marla Bossons at [email protected] – Just be sure to put a note saying it is for the BC Lions trip.