Island firefighters respond to two campfires in as many days 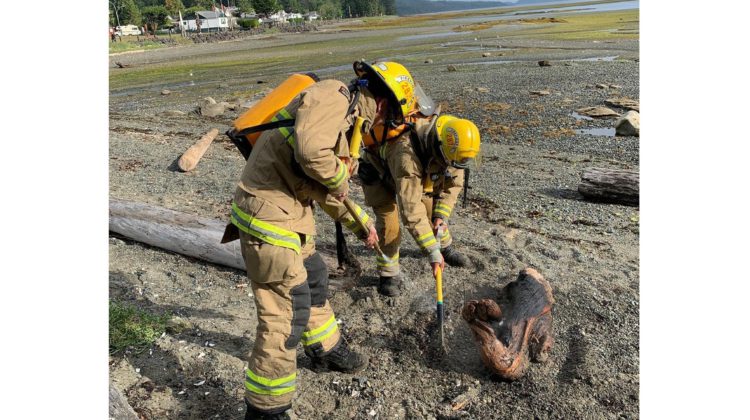 North Island fire crews are keeping busy, extinguishing campfires and sending out important reminders. As wildfires continue to ravage parts of B.C., including Vancouver Island, the ongoing provincial fire ban is being emphasized now more than ever.

“Even though we’ve had little bits of rain, and it seems not that hot out, we’re still under a total ban. Forests are still dry. We have to still be super vigilant and careful,” Port Hardy fire chief Brent Borg tells My Campbell River Now. Yesterday morning (Sunday), Borg says crews were called to the Carrot Park beach. “Somebody walking on the beach Sunday morning saw the fire. They just happened to be with their grandson, who was just evacuated from Kelowna,” he explains.

According to Borg, the campfire was ignited sometime the night before. He says the fire spotters did the “right thing” by reporting the remnants to authorities.

And just as Port Hardy firefighters put one fire out, another one pops up. In a Facebook post, Port Hardy Fire Rescue says they responded to another campfire today (Monday).

The post stated, “These actions are both irresponsible and dangerous, especially when left unattended and abandoned. Hefty fines and imprisonment for people caught in the act are possible under both the Wildfire Act and District of Port Hardy bylaws. Let’s not go there.”

But it’s a warning extending to all islanders — or anyone residing within the Coastal Fire Centre region, which includes Powell River. While most of the region still sits on the ‘extreme’ end of B.C.’s wildfire danger rating, fire information officer, Gordon Robinson says staff received ‘dozens’ of campfire reports over the weekend.

“I cannot stress enough how much of a bad idea that is at this point,”  Robinson explains.

“Even if the weather is feeling a bit cooler and even if we’re getting a little bit of rain, the amount of drying we’ve had in the forest over this year has not really been impacted yet. It’s going to take a lot more rain before we can see a drop in that fire danger rating and consider taking off the campfire ban.”

Robinson continues, “The Mount Hayes wildfire, burning near Ladysmith right now, is a prime example of how quickly a fire can get away. We don’t know if that was started by a campfire or not, but that fire started in the afternoon, grew to 20 hectares by the evening, and was at 70 by the next morning.”