A Happy Ending for Hope the Dog 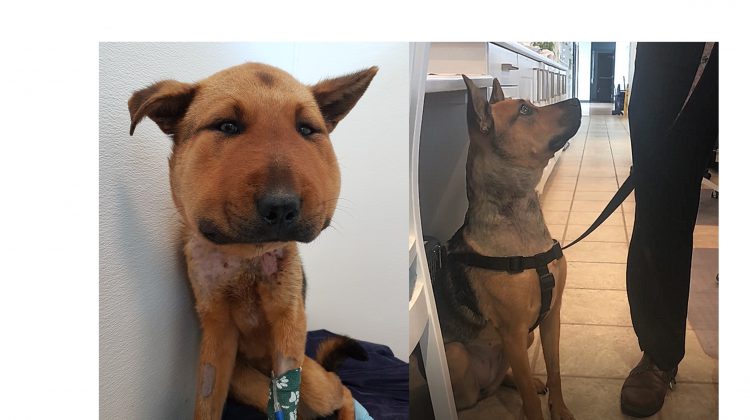 Hope before and after picture. Supplied by BC SPCA.

WARNING: Some of the information in this article is graphic

A Chemainus man has been charged with animal cruelty and could face up to two years in prison and a maximum fine of $75,000 dollars.

Two people found Hope abandoned in the woods and tied to a tree with a plastic and wire cable that was so tight, the one-year-old German Shepherd couldn’t lay down or move, and her face was pressed tightly against a tree.

The wire was embedded in the dog’s neck, causing a massive wound that resulted in the jugular vein and trachea being exposed with maggots inside the wound.

Chief Prevention and Enforcement Officer with the BC SPCA Marcie Moriarty said thanks to two caring individuals, Hope was given just that, hope.

“Two citizens found this dog which was subsequently named Hope, tied to a tree in the woods. She was tied so tight to the tree that she couldn’t lie down and with a plastic and wire cable,” said Moriarty.

Moriarty continued, “At the time she was found, she was emaciated, dehydrated, and had a very deep and severe neck wound as a result of the cable cutting into her.”

The wire was embedded in the dog’s neck, causing a massive wound that resulted in the jugular vein and trachea being exposed with maggots inside the wound.

Moriarty said Hope has made a miraculous recovery.

“This is a happy ending, Hope has a new guardian who is just thrilled to provide an incredible life for Hope,” said Moriarty.

After Hope was found, she required around-the-clock care and has had multiple surgeries and months of treatment and care.

There are parts of this case that are similar to the Teddy animal abuse case, however that dog wasn’t so lucky.