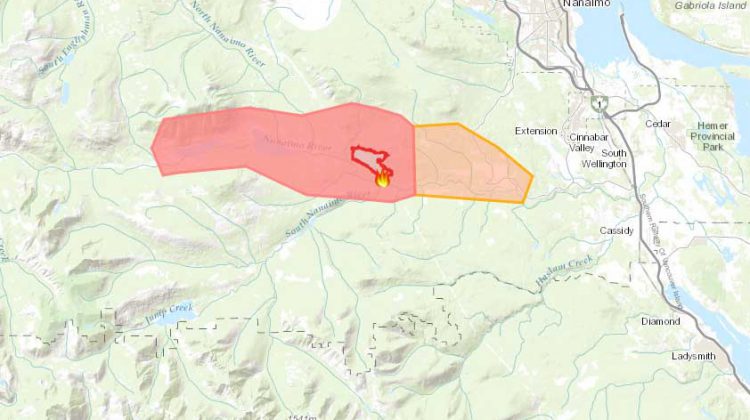 Most of the 462 wildfires burning in B.C. are small and in remote areas, but there are 25 fires of note burning in the six fire centres in the province.
Kevin Skrepnek, chief fire information officer, says there have been more fires in B.C. this year compared to 2017…..
Skrepnek says the fires are burning right from the southern border of B.C. to the north and on Vancouver Island.
He says there have been some successes when it comes to fighting the fires, but the weather forecast for Friday is a big concern.
He says along with a cooling trend it could get windy, and rain, at the moment, is a big x-factor.
The human-caused Nanaimo Lakes wildfire is now 160 hectares in size and has grown by 30 hectares in the last 24 hours.
Fifty-five firefighters and six helicopters have been deployed to fight the Nanaimo Lakes wildfire and a number of crews have been pulled back from other parts of the province.
Fire Information Officer Donna MacPherson is pleading with the public to be responsible.
MacPherson says these preventable fires need to stop because lightning-caused fires may spark, and these human-caused blazes take resources away from those fires sparked by lightning.
The Nanaimo Lakes fire is ten per cent contained and is still ‘out of control.’
The Chair of the Regional District of Nanaimo says the residents on evacuation alert, as a result of the wildfire south-west of Nanaimo, are taking the warning seriously.
Bill Veenhof says you don’t need to look beyond the Fort McMurray fires to know how rapidly something can change.
In the meantime, he says, the District’s Emergency Operations Centre is fully up and running…….
There are some traffic restrictions in effect in the area of Nanaimo River Road and Nanaimo Lakes Road and Veenhof says the District is asking hikers and bikers to stay out of the area for the time being.