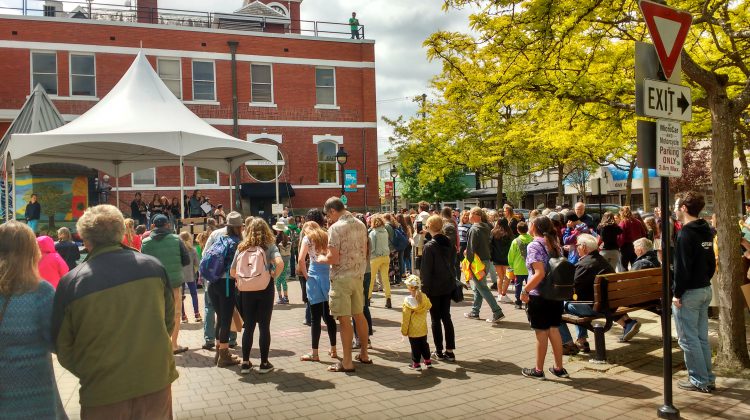 A crowd looks on at May 17 youth strike for climate change action in downtown Duncan. (Kyle Christensen, mycowichanvalleynow staff).

A second student climate strike is coming to Duncan City Square at noon Friday and students from across the Cowichan Valley will spread their message that action to combat climate change needs to be taken now.

With her generation set to inherit the earth, Cowichan Valley Earth Guardian, Katia Bannister says this movement has a lot of supporters and detractors.

“You get a lot of mixed feedback, I manage the social media for Cowichan Valley Earth Guardians and you get so much positivity and so much negativity mixed in,” said Bannister. “(You get) people who are saying we’re doing the right thing and they’re proud of us as youth taking responsibility for the earth we are about to inherit.”

She continued, “other people say we are just inciting panic.”

Pumping water over the Cowichan Weir is just the latest example of how severe the drought conditions have been here in the Cowichan Valley this year.

Bannister said, “it’s really about solidarity, showing that a place as small as Cowichan can be a part of something as big as a global climate strike, showing that we do care here in this beautiful place.”

The first student climate strike was held on May 17 and it saw more than four hundred people show up and Bannister is hoping the number of attendees is closer to one thousand Friday afternoon.

This rally will be followed by a march down Ingram Street to the CVRD offices.