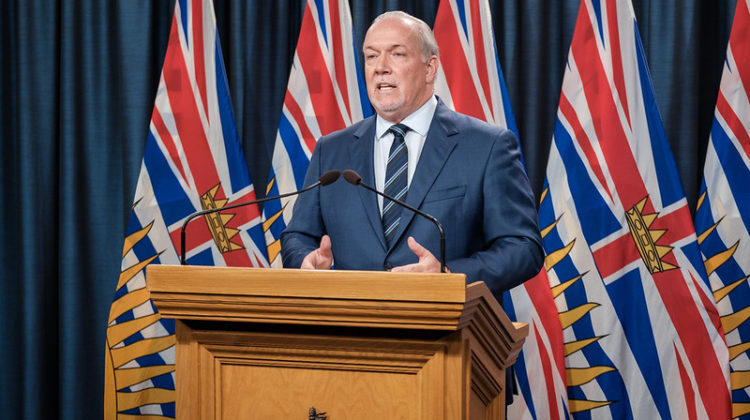 BC Premier John Horgan. (Photo supplied by BC Government Flickr)

Premier John Horgan is urging BCers to be cautious when in nature, due to the wildfire season beginning.

He spoke about how the heat has now spread inland to mainland BC and Alberta. There was an emphasis of inquiry on the current situation in Lytton, which had to be evacuated.

The Premier said that he spoke to the mayor of Lytton, Jan Polderman, and they have been coordinating on the situation. He says despite their efforts, the fire has spread throughout the town, destroying many homes and businesses.

Any encampments for those escaping wildfires will have rapid Covid testing protocols in place, a protocol system that was created for last wildfire season.

When it comes to the causes of the fire, they are still unknown, but the Premier urged British Columbians to practice responsible behaviour when out in nature. If not for you, then for the firefighters.

“Firefighters are putting their lives on the line to protect us. Let’s not add to their frustrations. Let’s not add to their challenges, by being the result of the fires starting,” Horgan says. “We can’t do anything about lightning strikes, but we can do something about our personal behaviour. And I urge all British Columbians to be very cautious when they’re out and about in the forests.”

Horgan says increased fires are something to be expected with continued climate change.

He expressed gratitude to those currently fighting the fires. The Premier says he spoke with the Prime Minister and the idea of bringing in the Canadian Military to help tame the fires isn’t out of the question, but says they are able to handle the current situation with the resources they currently have.

Malahat Lookout Totem Taken Down For Refurbishing After Arson Attempt