Vandals Damage The Raptors on Herd Road in North Cowichan 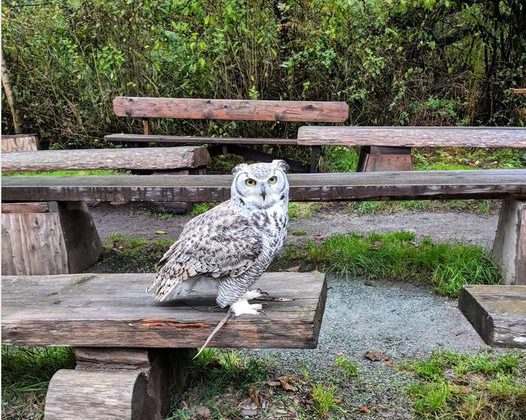 Arktos. the Great Horned Owl at The Raptors. Photograph courtesy of The Raptors Facebook page.

The Raptors on Herd Road in North Cowichan was damaged by vandals on the weekend.

According to King, “they bashed open a bunch of doors, they ripped some holes in some aviary netting, they damaged some of our release boxes, and the benches at our flying field, and tried to take apart part of the fence that separates the flying field from the benches.”

He says there was a lot of random damage, but while some cage doors had been opened, none of the raptors were harmed, nor did any escape.

However, the noise and disruption likely would have been quite upsetting for the birds.

King says it was definitely upsetting for the staff when they saw what had been done.

“We’re disappointed, it was very upsetting for all the team coming in, we obviously care a lot about these birds and their safety was our first big concern coming in.”

Their live demonstration schedule will not be affected.

While there is no final estimate of the cost to repair the damage, King believes it will be about four thousand dollars.

He’s asking anyone with information that may help identify the vandals to come forward.