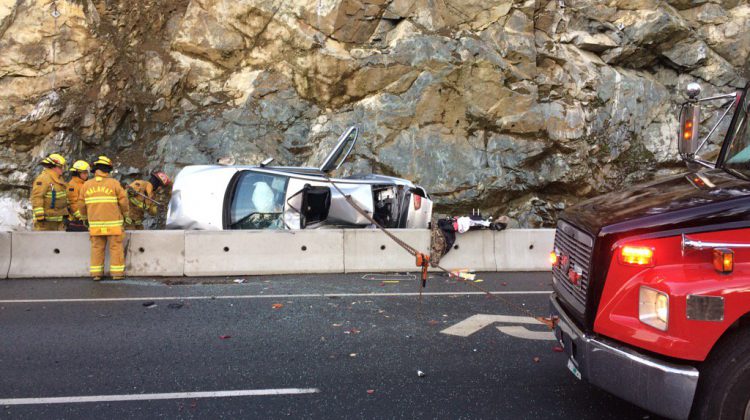 Photo: Malahat Fire Chief Rob Patterson/Twitter
The Capital and the Cowichan Valley Regional District’s agree that something must be done to slow down motorists on the Malahat.
The Capital Regional District has requested that the provincial government look at installing speed cameras from Mill Bay Road to the Langford Parkway.
The CVRD supports this initiative and Board Chair, Jon Lefebure has the same driving habits as many who travel that 20-kilometre stretch.
Lefebure says there hasn’t been much opposition to the idea.
These cameras would function like checkpoints, where this surveillance measure would take a picture of licence plates.
If a driver travels at more than ten kilometres an hour over the posted speed limit, the time from camera-to-camera will reflect that.
Lefebure says it’s no secret that speed leads to more fatalities on the roads.
The Gordon Campbell Government scrapped the photo radar program in 2001.
Tags: Capital Regional DistrictCowichan Valley Regional DistrictLangdaleMalahatMill Bay Roadmotoristsprovincial governmentslow downspeed cameras