Fall out from storm continues to resonate 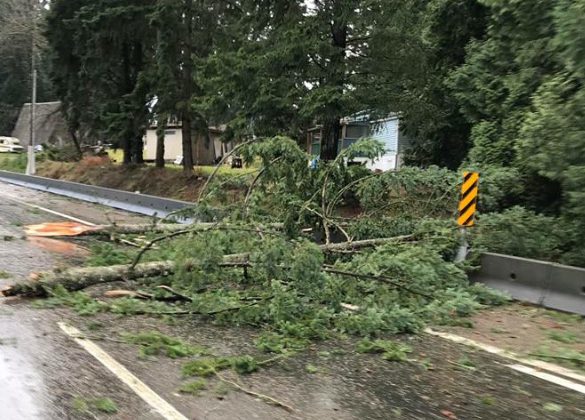 BC Hydro has crews from out east, Alberta and from all over this province on Vancouver Island and the Gulf Islands working to get power restored to about 44,000 customers.

We spoke to Ted Olynyk, of BC Hydro this morning (Mon) and he said those crews will stay on the job until power is restored to everyone.

There are about 7500 customers in Nanaimo and 4400 in Duncan still without power.

“We are making progress but it’s not the fast progress we would certainly like to have. In a typical winter storm we might see a branch on a line and we could do it in an hour.  This one, we are not just seeing the branch, we are seeing the whole tree on the line and the line is down and the pole is broken. And in some areas, like Stoney Hill for example, we’ve got 40 spans of line down out there.

In the Cowichan Valley, Olynyk said the power is being restored as fast as crews can work but it’s tough slogging.

“There’s lots of damage in Shawnigan Lake.  If you’ve been driving around in Shawnigan Lake you can certainly appreciate the damage there. We are dealing with pocket outages, anywhere up to 50 people but there’s just so many volumes of calls, and the crews are spending so much time on one call because it’s a broken pole or a downed line they have to attend to.  In the Kingburne area we have quite a lot of poles down at Mount Sicker we will have people there all day to make repairs.  Honeymoon Bay should be on by noon and Lake Cowichan is all on now.”

Olynyk said crews are coming across some downed trees and lines and finding piles of sawdust where someone cut a tree and he says that’s extremely dangerous because the line could be live either because the power didn’t trip off when the line fell, or because a generator is not hooked up properly and someone is feeding power back into the line.

Updated BC Hydro information is here:  https://www.bchydro.com/news/press_centre/news_releases/2018/bc-hydro-crews-continue-to-repair-damage-after-historic-windstorm.html
=======
There are warming centres in the Cowichan Valley valley open today (Mon).
You can warm up at Frank Jamieson in Ladysmith until noon.
You can warm up and charge your phone at the Fuller Lake Arena until 3 and at the Kerry Park Recreation Centre until 4.

Lake Cowichan Secondary School will be open for warming up until 4.

You can get more information about those centres here:  https://www.cvrd.bc.ca/2275/Current-Emergency-Information

There’s a bin at the Kerry Park Recreation Centre in the upper parking lot beside the curling rink for spoiled food only.

The services are only for residential spoiled food contents.

================
The Cowichan Valley Regional District is reporting people should use extreme caution in local parks.
That’s because the storm, of last week, has left downed trees throughout the region.
Where the problems are really acute there are park closures and signs have been posted.
===============