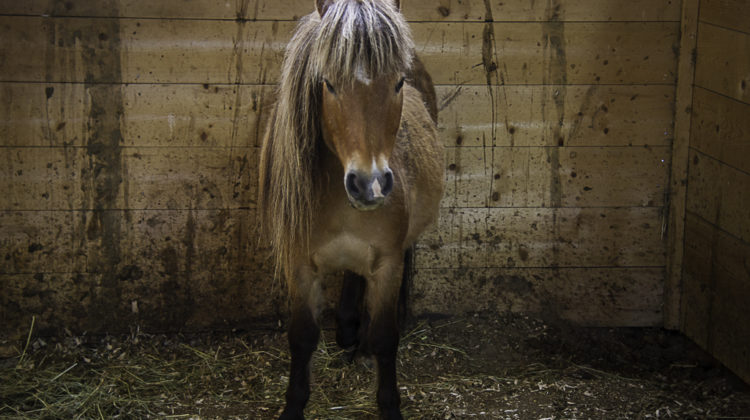 Rescued pony stands quietly in a stall at Humanity for Horses near Duncan. Photograph by Mike Patterson 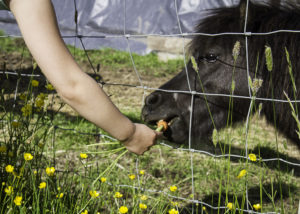 Saffron sniffs cautiously at the treat being offered through the fence, then gingerly takes the carrot in her mouth and gently begins to chew.

The black miniature pony may be diminutive, but Rebecca Sanesh of Humanity for Horses in Duncan, BC, says she rules the pasture.

When the carrot is finished, Saffron is happy to stand by the fence and accept handfuls of the long grass growing along the lane outside the pasture.

Saffron is one of more than 30 horses Sanesh and her group are caring for at the farm near Duncan.

She says 11 of the horses are available for adoption to new homes, but the remaining are too old or have medical problems and will remain with Humanity for Horses to peacefully live out the rest of their lives. 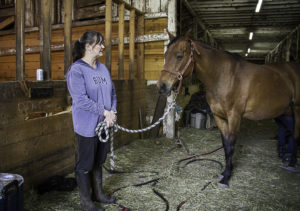 Rebecca Sanesh and a rescue horse at Humanity for Horses near Duncan, B.C. – Photograph by Mike Patterson

The previous week has been a busy one for Sanesh and her organization as they helped two breeders in Alberta keep their horses from the auction.

Sanesh explains, “if they go to auction, approximately 90 percent of them will end up going for meat and they’ll be slaughtered.”

She says the auction grounds are presently “limiting the number of people who can actually attend the auctions, so the meat buyers get priority.”

The latest rescue began when Humanity for Horses shared an ad posted on Kijiji offering ponies for sale in Alberta on its Facebook page. Sharing it brought offers of new homes for 29 of the ponies.

The owner, an oil industry worker in Alberta out of work due to the COVID-19 pandemic and no longer able to keep the ponies, contacted Humanity for Horses on May 18 to ask if they could take the remaining 11 horses.

Sanesh says the cost of trucking horses from Alberta to British Columbia is usually about $1000 per horse, but the owner offered to haul them for $2,500 per truckload.

However, the rescue effort became still larger when the breeder called back to say a friend had 20 ponies that were already at the auction but he would pull them out if Humanity for Horses could save them.

Among the ponies at the auction house were a couple of colts, two pregnant mares, and a mare with a colt.

Sanesh says that to cover the enormous cost of buying, transporting, and caring for the horses she put out an appeal for support on social media. “So I gave it my best shot and God bless the Cowichan Valley and the Island and everybody who follows our page because we raised enough funds to get all the ponies and pay for all the hauling.”

She says they were able to bring the 31 horses to B.C., where most have already found new homes.

Sanesh says Humanity for Horses was started in 2015 to rescue horses that would likely be sent to slaughterhouses for meat or to render the carcasses for by-products.

She says most of the horses they rescue have simply become too old or have suffered illness or injury and their owners no longer want them.

They presently have horses in their care in Duncan, Abbotsford, and Salmon Arm.

The yearly costs are high and Sanesh says the COVID-19 pandemic has put a damper on their fundraising.

She says Humanity for Horses has to pay veterinarian fees on top of the more than $34,000 dollars they expect to pay for hay this year.

The non-profit organization relies on donations from the public to rescue and care for horses. 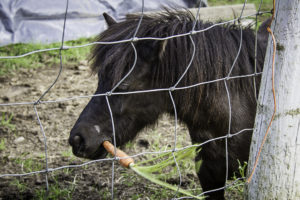