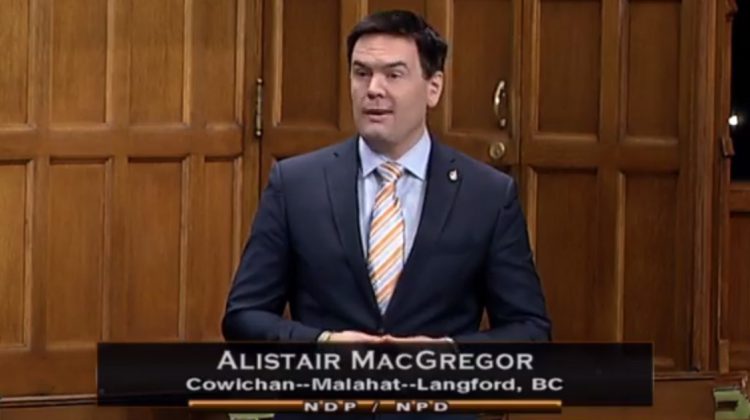 On the heels of the federal budget announcement, the local M.P. is expressing disappointment in a few areas.

Cowichan-Malahat-Langford M.P., Alistair MacGregor says the Trudeau government is taking action on developing a national Pharmacare program, however, it sounds like more consultation work, work that’s been ongoing since the late 90’s.

MacGregor says now is the time for implementation not more consultation on the issue of Pharmacare.

The well-connected and the wealthy continue using tax-havens to escape having to pay taxes, meaning a major revenue stream isn’t available.

MacGregor is expressing frustration that the recently announced federal budget doesn’t include any regulations to go after the havens that the many wealthy Canadians use to escape the national tax system.

He adds that no new measures are in place to force corporations and the extremely wealthy to pay their taxes and that burden is placed squarely on the shoulders of average Canadians.

MacGregor was appointed the Agriculture Critic earlier in 2018 and says it’s very disappointing that no money was directed at the agriculture sector.

He calls it startling that the Trudeau Government isn’t spending money on agriculture, even though the federal government is working with the provinces in April, to develop a national food policy.