The Municipality of North Cowichan is reporting Osborne Bay Road has now reopened and people who were asked to leave their homes for fire fighting purposes can now go home.

RCMP were out door knocking this evening advising residents who need to be on evacuation alert in case the fire at Maple Bay Mountain flares up again.

The area where residents are affected is on the east side of Osborne Bay Road from Herd Road to Tatlo Road West.

The Municipality is asking people who were put on alert to pack prescriptions, water, clothing, pet supplies, cell phones and chargers so they can leave quickly if need be.

If an evacuation order is issued, residents can go to the Island Savings Centre which will be set up as an Emergency Reception Centre.

Unless the fire flares up again, the Municipality will not be making further statements this evening.

The human caused fire, at Maple Bay Mountain, broke out this afternoon around 3 o’clock prompting all the area fire detachments and the Coastal Fire Centre to respond.

It was just over one hectare, or two and a half acres in size.

==================
The Municipality of North Cowichan is reporting a small number of residents have been asked to temporarily leave or be prepared to leave their homes to allow for more effective fire fighting.
The Municipality says affected residents will be contacted door-to-door.
No large scale evacuation is required at this time.
An eAlert notice has not been issued.
If you haven’t signed up for an eAlert through the Municipality you can do so by logging in to:  https://www.northcowichan.ca/forms/eALERT.aspx 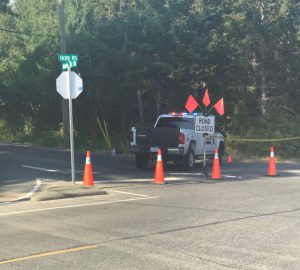 North Cowichan Duncan RMCP Constable Pam Bolton says an evacuation alert is in effect for some residents….
Bolton says RCMP will be going door to door….
The wildfire broke out around 3 o’clock this afternoon (Wed) and is about a hectare or 2 and a half acres in size.
Eight local fire detachments are on scene along with a trio of helicopters from the Coastal Fire Centre.
The Coastal Fire Centre is reporting the fire was human-caused.

We have heard from some residents in North Cowichan who say they are seeing ashes falling on their lawns, cars, and homes.

Some say they are hosing down their property and loading their cars just in case.

Transit routes are affected as well, Route 6 trips will NOT use the bus stops along Herd Road or along Osborne Bay Road.

The main bus stops on Joan Avenue in Crofton will still be used for pick up and drop off in the Crofton area.

The province lists the following actions to take when an evacuation alert is issued for your area:

* Prepare to leave your home on short notice.

* Stay tuned to your local authority’s public information channels, as well as Emergency Info BC for updates: http://www.emergencyinfobc.gov.bc.ca

* Have your emergency kit and important documents ready to go, which should include things like insurance and personal papers, such as birth certificates. You should also pack:
* Several days’ clothing.

* For your children, comfort items, like a favourite toy or colouring books to help keep them busy.

* For your pets, leashes, carriers and pet food.

* Consider collecting precious photos and mementos that cannot be replaced.

As well, please check in on any family, friends or neighbours who may need a helping hand due to mobility or other issues.

* Wear a long-sleeved shirt, long pants, and sturdy shoes to help protect you from unforeseen hazards.

* Collect family members, or go to the place designated in your family plan as a meeting place.

* Plan to take your pets with you. Do not leave them behind. Because pets are not permitted in public shelters, follow your plan to go to a relative or friend’s home, or find a pet-friendly hotel.

* Grab your emergency kit and follow the directions to the identified reception centre.

* Follow the routes specified by emergency officials. Avoid shortcuts, as they could take you to a blocked or dangerous area.

* Take your pets in kennels or on a leash.

* Close all doors and windows. Close and latch gates, but do not lock them.

* Take a cell phone, if you have one.

* If there is time and it is safe to do so, shut off the water at the main line into your home, and switch off electricity at the breaker panel. Leave natural gas service on.

* Stay well away from any downed power lines.

* If you go to an evacuation centre, sign up with the registration desk so you can be contacted or reunited with your family and loved ones.

* Contact your out-of-area emergency contact (identified in your personal emergency plan) to let them know what has happened, that you are okay, and how to contact you. Alert them to any separated family members.