Grief, Anger and Trauma Over Discovery of 215 Indigenous Children Buried in Unmarked Graves in Kamloops 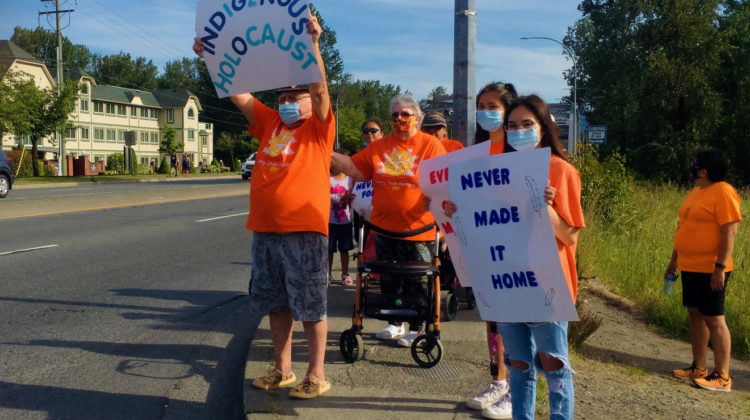 One of the organizers, Monica Patsy Jones, says the event was hastily arranged after people in the community began posting calls on social media for some kind of an event.

According to Jones “somebody just posted that we need to do something and then everybody just tagged into it, like a lot of community members tagged into it” and an event was organized in less than 24 hours.

Last Thursday, the Kamloops Indian Band revealed that ground-penetrating radar had been used to locate the bodies of 215 children at the school.

Jones says the news out of Kamloops really hit home because some children from the Cowichan Valley were sent to that school.

She says sending the children to distant schools “was so that families couldn’t go retrieve them, or visit them, or bring them home that easily,” and Jones says she knows that some local children were sent to Kamloops.

Jones says the news of the graves in Kamloops opened wounds in the community.

She says the abuse elders suffered affected everyone, “that’s how all our lives were damaged because our grandparents, ancestors, couldn’t heal” and it had a profound impact on younger generations.

Sayers says “if we want reconciliation, this is one of those things, because the truth is now out” and there’s a real need to press the government for the funds to do a thorough investigation.

Sayers says Indigenous people need “to put our children to rest respectfully” and deal with the trauma they are going through after learning the fate of the 215 children.

Three residential schools in British Columbia were in Nuu Chah Nulth territory, in Port Alberni, on Meares Island near Tofino, and at Ahousaht on Nootka Island.

There were also residential schools on Penelakut Island near Chemainus and Alert Bay on northeast Vancouver Island.