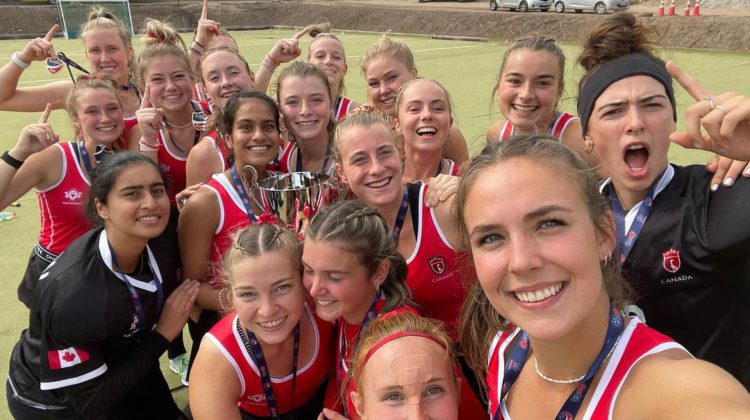 A young woman from the Cowichan Valley has punched her ticket to the World Cup. That’s the women’s Field Hockey Junior World Cup happening in South Africa this December.

Duncan’s Sara Goodman was Canada’s team captain, they secured its spot with a win over Chile on Friday in this year’s Junior Pan-American Championships. The top-three teams from the tournament qualify for the worldwide event.

The win against Chile sent them to the finals against Uruguay for a match on Saturday morning. It was their second time facing Uruguay this tournament. Their first contest ended in a draw, 0-0, so there was a lot of anticipation around who would dent the twine first.

The final game was a close match, tied at zeros through halftime. It took until the 53rd minute for someone to get on the board, and it was Victoria’s Anna Mollenhauer who bested the Uruguayan goalie to put Canada ahead and secure the win. To say they were excited by the win, would be an understatement.

Weeeeeee are the champions 🎵🎶

Canada’s tight defense, lead by Goodman, was key to their victory as they allowed no goals through all four games of the tournament. They also went undefeated, winning all three of their matches, except their tie against Uruguay.

Goodman is a strong defender whose play has lead to accolades at different levels. She started playing field hockey as a six-year-old following in the footsteps of her older sister, Kelsey. She played club hockey for Cowichan Field Hockey Club, and helped bring a High School Provincial Championship to Cowichan Secondary School in 2015.

After graduating from high school, she headed off to play for the University of British Columbia, where she was named the Canada West player of the year, in her junior year.

Before the tournament, Goodman is quoted saying that she was hoping to bring a top-three finish to Canada, little did she know she would help them secure the Pan-Am Championship.

She was counted on to be a leader at this tournament, having played for Canada in the last Pan-Am tournament in Trinidad and Tobago in 2016, helping Canada to a fourth place finish. Now as one of the older players on the team, and one of few returners, she was counted on for her experience. She also has shifted from a midfielder to a defender in her time between tournaments.

While she was part of a dominant defense, Goodman also showed some of her offensive ability in the tournament, scoring the game-winning goal against the historically dominant Argentina.

This is Canada’s first time winning the Pan-Am tournament, having finished second twice to Argentina in 1997 and 2012. It’s also only the second time that Argentina has not won the tournament, since the every four year tournament was established in 1988.

As they head off to the World Cup in December, eyes will be on Goodman and the rest of the squad to see if they can beat Canada’s best finish of seventh – which came on Canadian soil in 1989. Or hey, maybe Goodman and the rest will surpass expectations again and bring the gold home, which would put a nice bow on her junior career.